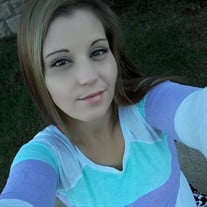 Kelsey Jane (Godsil) Bunker, 29, died June 13, 2020, at her home in Galesburg, IL after fighting an almost decade long battle with drug addiction. Kelsey was born March 4, 1991, in Galesburg to John R. & Diane M. Godsil, who survive. Kelsey attended Danville Iowa public school from 1st through 7th grades, Galesburg public schools, a private home school, and then obtained her GED. Kelsey was preceded in death by her paternal grandparents, James H. Godsil and Mary Jane Ferraro Godsil Shane, and also her maternal grandfather, Ira Ramsey of Donnellson, Iowa. Kelsey married Spencer Bunker on October 14, 2009, in Galesburg. Spencer gave her a loving step-son Austin Spears-Bunker, and they had two children, Gemma Jade Marie Bunker and Lucas Bryan Bunker, all of whom survive her, currently of Cedar Rapids, Iowa. She and Spencer divorced in 2015. Kelsey later had more children who were eventually adopted and also survive her: Jenna, Jordan, Kensly. Kelsey is also survived by her maternal grandmother, Donna Ramsey; half-brother ‘Tony’ (John A.) Godsil of Las Vegas, NV; half-brother Jason Godsil and fiancé Stacy Shaner of Kewanee, IL; half-brother Brian Godsil and partner Tiffany Ellison of Galesburg; half-sister Jennifer Godsil and partner Roy Lamb of Galesburg, and younger sister Kaitlyn Godsil and fiancé Jarod Cox of Galesburg; an especially close aunt, Denise Ramsey, and numerous other aunts, uncles, and cousins. Kelsey loved the outdoors and all things country. She had sparkling eyes, a beautiful singing voice, and was very creative. She was a Christian and was a very caring and loving person. She deeply loved and missed her children and was depressed and distraught that she was not able to raise them herself. She was a Daddy’s girl and also had an especially close bond with her Grandma Donna Ramsey. Visitation will be Monday, June 22, 2020, from 9 to 11 a.m., with the family present from 10 to 11 a.m. at Hurd-Hendricks Funeral Home in Knoxville, IL. Private funeral service to follow at 11 a.m. with Pastor Vince Rohn of 1st UMC of Galesburg officiating, after which cremation will be accorded. Memorial contributions may be made to the funeral home or to the family. Due to Covid-19 restrictions, face masks and social distancing required. To send flowers or a memorial gift to the family of Kelsey Jane (Godsil) Bunker please visit our Sympathy Store.
To send flowers to the family in memory of Kelsey Jane (Godsil) Bunker, please visit our flower store.