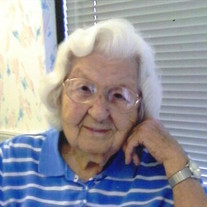 Kathryn M. Morse, 101, of Galesburg, formerly of Gilson, Illinois passed away at 10:45 P.M on Tuesday, March 7, 2017 at Rosewood Care Center, Galesburg, Illinois. Kathryn was born on July 12, 1915 in Knoxville, Illinois, the daughter of Ora and Edna Mahon Woolsey. She was raised and educated in Knoxville, Illinois. Kathryn married David H. Morse on January 25, 1948 in Knoxville, Illinois. He preceded her in death on September 6, 1996. Kathryn was a homemaker. She was very well liked and did not know a stranger. Kathryn was a great mother and grandmother. Kathryn is survived by her three children, Merle Wall of Galesburg, Illinois, Dave Morse and fiancée Kathleen McClay of Galesburg, Illinois, and Danny (Nancy) Morse of Gilson, Illinois; 9 grandchildren, 22 great-grandchildren, and 6 great-great grandchildren. She was preceded in death by her parents, husband, one son Donny Morse and three brothers. Visitation will be from 1:00 P.M. to 3:00 P.M. on Tuesday, March 14, 2017 at Hurd-Hendricks Funeral Home, Knoxville, Illinois. There will be no funeral or graveside service. She will be interred in Gilson Cemetery. Memorials may be made to the family. Hurd-Hendricks Funeral Homes and Crematory are in charge of arrangements. On-line Condolences may be made through www.hurd-hendricksfuneralhomes.com To send flowers or a memorial gift to the family of Kathryn M. Morse please visit our Sympathy Store.
To send flowers to the family in memory of Kathryn M. Morse, please visit our flower store.