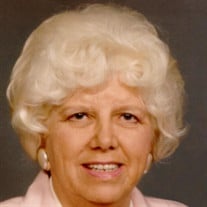 June Irene Nickas age 91, of Galesburg, Illinois formerly of Altona, Illinois died at 3:05 P.M. on Monday, June 1, 2020 at Seminary Manor in Galesburg, Illinois. She was born on February 7, 1929 in Altona, Illinois the daughter of Bernard and Helga (Lundholm) Quanstrom. She graduated from Walnut Grove Township High School in 1947. She married George Christo “Chris” Nickas on June 7, 1953 at the Altona Presbyterian Church in Altona, Illinois. He preceded her in death on April 29, 2008. Survivors include: sister-in-law Pam Quanstrom of Galesburg; sister-in-law Helen (Marvin) Masters of Galesburg; sister-in-law Grace Nickas of Peru; nephew Don (Missy) Quanstrom of Galva, Illinois; nieces: Mary Empson of Kewanee, Kim Quanstrom of Galesburg and Kelly (Kevin) Lee of Oswego; great nieces Nikole Williams of Peoria and MacKenzie Lee of Aurora; great nephews Jeremy Empson of Galesburg and Colby Lee of Oswego; great-great nieces Cassidy Empson of Bloomington, Alexius Empson of Galesburg and Tionna Carter of Peoria as well as many other cousins, nieces and nephews. She was preceded in death by her parents as well as brothers Gerald Quanstrom and James Quanstrom. She worked for Met Life Insurance Company as a Supervisor for fifteen years, then for Allied Agency Center in Peoria, Illinois for ten years. She was a member of the United Church of Altona in Altona, Illinois. She enjoyed art, music and reading. June was very proud of her Swedish heritage. She hosted a traditional Swedish meal every Christmas Eve for family and friends. Cremation rites have been accorded. Graveside Services will be held at 10:30 AM on Tuesday, June 9, 2020 at the Altona Cemetery, Altona, Illinois. Memorial Contributions can be made to the United Church of Altona. Online condolences and expressions of sympathy may be made through www.hurd-hendricksfuneralhome.com. To send flowers or a memorial gift to the family of June I. Nickas please visit our Sympathy Store.
To send flowers to the family in memory of June I. Nickas, please visit our flower store.