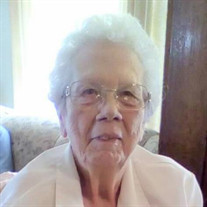 Juanita “Pearl” Henderson, age 93, of Galesburg, Illinois, died at 9:32 A.M. on Friday, November 2, 2018 at the OSF Saint Francis Medical Center in Peoria, Illinois. She was born on April 11, 1925 in Nekoma, Illinois, the daughter of George and Mable (Swanson) Seiler. After graduating from Altona High School in 1943, she went on to work at the Galva Creamery. She was later employed at the former Montgomery Wards, then the former Quint’s Tire in Galesburg. She would go on to work at the J.C. Penney Catalog Department for twenty-one years, until her retirement. On February 25, 1947, Pearl was married to Gerald “Jerry” Henderson at the Lutheran church in Woodhull, Illinois. He preceded her in death on November 19, 2017. Pearl is survived by her daughters: Suzie (and Paul) Rothenberg of Springfield, Illinois, Dorie (and Richard) Johnson of Gilson, Illinois; one granddaughter, Morgan Johnson of Deer Creek, Illinois; three step-grandchildren: Jerry Rothenberg of Springfield, Jennifer (and Don) Hunt of Springfield, Joshua (and Christina) Johnson of Shanghai, China; one step-great-grandchild, Marcus Rothenberg of Springfield; and special neighbors, Paul and Tina Martindale. She was preceded in death by her parents; husband; one daughter, Ginger; and one brother, Robert. She was a member of the Trinity Lutheran Church in Galesburg, as well as a member of the OAKS Senior Center in Galesburg. Pastimes that Pearl enjoyed included embroidering and playing cards; her favorite games were Pinochle, Canasta, and Pitch. Most of all, Pearl loved spending time with her family and friends. Visitation will be held on Wednesday, November 7, 2018 from 5:00 P.M. to 7:00 P.M. at the Hurd-Hendricks Funeral Home in Oneida, Illinois. Funeral services will be held on Thursday, November 8, 2018 at 11:30 A.M. at the Hurd-Hendricks Funeral Home in Oneida, Deacon Michael Crummer officiating. Interment will be at the Oneida Cemetery in Oneida. Memorial contributions may be made to the OAKS Senior Center or a charity of the donor’s choice. To send flowers or a memorial gift to the family of Juanita "Pearl" Henderson please visit our Sympathy Store.
To send flowers to the family in memory of Juanita "Pearl" Henderson, please visit our flower store.