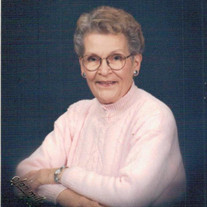 Joyce L. (Burgess) Stodgel, 91, formerly of Williamsfield, passed away on Saturday, December 12, 2020, 12:30 AM, at Knox County Nursing Home, Knoxville. Joyce was born on July 9, 1929 in Peoria. She was the daughter of Merle and Margaret (Traer) Burgess (Clous). Elementary school was completed in one room rural schools. She graduated from Williamsfield High School in 1947. She attended Denver University for one year. She married Wm. Frank Stodgel on January 1, 1949 in Denver. They returned to Williamsfield in May of that year. She worked in various occupations, clerical at the Prairie Farms Creamery in Galesburg for five years, following that, she worked at local grocery stores in Williamsfield part-time while raising her children. She then began a career in mental health in 1968 at the former Galesburg Mental Health Center, transferring to Zeller Mental Health Center in 1985, retiring from there n June of 1993 in order to take care of her husband. Following his death in June of 1995, she returned to work in August 1995 as a CNA for Galesburg Cottage Hospital, retiring from there in 2007, but remained active in caring for people in her community. She was a member of the Williamsfield United Methodist Church. She enjoyed participating with other seniors at the weekly noon meals at their Drop Inn. She was an avid reader, remaining an active ‘learner” of current events, locally, nationally, and world-wide. Joyce is survived by her two daughters, Sandy (Ron) Duke of Kingman, AZ and Cheryl (George) Woods of Oneida; 12 grandchildren; many great-grandchildren, step-grandchildren and step-great grandchildren; sister, Kathy Palmer of Yuma, AZ; and “her red-headed daughter,” Val Weeks of Galesburg. She was preceded in death by her parents; husband; daughter Cindie Stodgel; son, Lynndon Stodgel; grandson, Daniel Woods; brother, Benjamin; and step-son Larry. Cremation rites have been accorded. A memorial graveside service will be at 1 PM, Saturday, June 12, 2021 at the Williamsfield Cemetery, Williamsfield. Pastor Teri Shane will officiate. A celebration of life will be held following the graveside at Benjamin Doubet Park, Williamsfield. Hurd-Hendricks Funeral Homes and Crematory of Knoxville has been entrusted with arrangements. Memorials may be donated to the Williamsfield United Methodist Church; Williamsfield Public Library, or to Soaring Eagle (an assisted living facility for Native American Senior Citizens) P.O. Box 879, Billings, MT 59103-0879. On-line condolences and expressions of sympathy may be made through www.hurd-hendricksfuneralhome.com To send flowers or a memorial gift to the family of Joyce L. (Burgess) Stodgel please visit our Sympathy Store.
To send flowers to the family in memory of Joyce L. (Burgess) Stodgel, please visit our flower store.