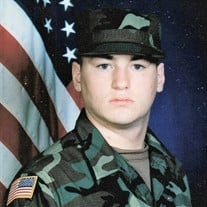 Joseph L. Hogue, age 32, of Summit, Illinois, formerly of Oneida, Illinois, died at 9:34 A.M. on Friday, January 25, 2019 at his home in Summit. He was born on April 6, 1986 in Galesburg, Illinois, the son of Carl Fitchpatrick and Tammy Hogue. He was reared and educated in the Knox County area. He graduated from ROWVA High School in 2004. After graduation, Joseph enlisted in the United States Army, proudly serving his country for three years until his honorable discharge in 2007. On September 23, 2017, he married Paulina Ayanbadejo in Chicago, Illinois. Left to cherish his memory is his wife, Paulina Hogue of Chicago; his father and step-mother: Carl (and Shelly) Fitchpatrick of Barstow, California; his mother and step-father: Tammy (and Ron) Canini of Westerville, Ohio; his paternal grandparents, Sam and Karen Reynolds of Oneida; his siblings: Scott Heiman of Galesburg, Illinois, Daniell “Tia” (and Steve) Burke of East Galesburg, Illinois; and his nieces and nephew: Nevaeh, Ziggy, and Trinity Burke, and Jaxon Heiman. He was preceded in death by his maternal grandparents, Roy Hogue and Mary Creighton-Holt. Joseph worked as a certified nursing assistant at the City View Multi Care Center in Chicago. Visitation will be held on Monday, February 4, 2019 from 5:00 P.M. to 7:00 P.M. at the Hurd-Hendricks Funeral Home & Crematory in Knoxville, Illinois. Funeral services will be held on Tuesday, February 5, 2019 at 11:00 A.M. at the Hurd-Hendricks Funeral Home & Crematory in Knoxville, with Military Rites conducted by the VFW/American Legion/AMVETS Honor Guard. Inurnment will be at a later date at the Oneida Cemetery in Oneida. Memorial contributions may be made to the family. To send flowers or a memorial gift to the family of Joseph L. Hogue please visit our Sympathy Store.
To send flowers to the family in memory of Joseph L. Hogue, please visit our flower store.