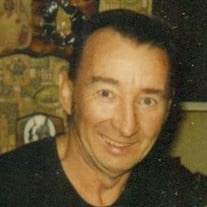 John Weston “Bub” Beard, 75, of Gilson, Illinois died at 6:45 A.M. on Tuesday, May 31, 2016 at his home. John was born on October 1, 1940 in Keokuk, Iowa, the son of Emil Weston and Charlotte Marie Brown Beard. He was a member of the Harry Philblad American Post 749 in Knoxville and was a lifetime member of the NRA. John first worked as a heavy equipment operator, he was also a chief engineer on a tug boat, and he finished his career as a truck driver. He was part of the construction crew that built the Sears Tower in Chicago. John is survived by his fiancé, Shirley Essary Beard of Gilson, Illinois; one daughter, Johnnie Ann (Tracy) Hall of High Hat, Kentucky; two grandchildren, Aaron (Mary) Beard and Ragina Beard all of High Hat, Kentucky; one great grandson A.J. Beard and one great granddaughter on the way, Dallas Beard; his siblings, Connie (Cliff) Tanner of Campbell Hill, Illinois, Michael Beard of Baton Rouge, Louisiana, Reva (Garlan) Leadbetter of Chatham, Illinois, and Clara (Mike) Jones of Port Allen, Louisana; his namesake, Joshua Weston Chaisson of Port Allen, Louisana; and several nieces and nephews. He was preceded in death by his parents; one sister, Mary Etta Beard; one brother, Kenneth Valor Beard; and one nephew, Greg Weston Jones. Visitation will be held on Saturday, June 4, 2016 from 10:00 A.M. to 11:00 A.M. at the Hurd-Hendricks Funeral Home in Knoxville, Illinois. Graveside service will be at 11:30 A.M. on Saturday, June 4, 2016 at the Knoxville Cemetery, Knoxville, Illinois. Rev. Gracie Ginther will officiate. Memorials may be made to the family. Online condolences can be made at www.hurd-hendricksfuneralhome.com To send flowers or a memorial gift to the family of John W. Beard please visit our Sympathy Store.
To send flowers to the family in memory of John W. Beard, please visit our flower store.