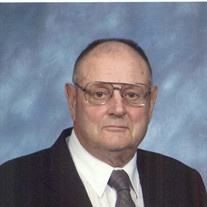 Jerry R. Hanson, 91, of Monmouth, Illinois died at 3:02 P.M. Tuesday, May 10, 2016 at the Monmouth Nursing Home, Monmouth, Illinois. Jerry was born on August 1, 1924 in Warren County, the son of Willard H. and Edna Ranney Hanson. He was raised and educated in Warren County and graduated from Monmouth High School. Jerry married Doris Johnson on November 23, 1952 at Trinity Lutheran Church, Galesburg, Illinois. Jerry farmed for many years in the Cameron area where he also raised Angus cattle which he was very proud of. He served in the Illinois National Guard for three years. Jerry attended and was a member of Trinity Lutheran Church in Galesburg where he also served on the board. He was also a member of the LaMoine Valley Angus Association, Warren Henderson Angus Association, Soil and Water Conservation Board, Coldbrook Township Board, Oak Run Board, Victoria, Illinois American Legion Post 726, and the last remaining original school board member for Warren School which he served on for 20 years. Jerry is survived by his wife, Doris of Galesburg; two sons, Marc (Shelli) Hanson of Rural Cameron, Illinois and Bruce (Joyce) Hanson of Burlington, Illinois; one daughter, Donna (Robert Saiz) Hanson of Phoenix, Arizona; one granddaughter, Brooke (Adam) Robinson of Rural Monmouth, Illinois; two sisters-in-law, Carol Hanson of Rural Monmouth, Illinois and Phyllis Hanson of Galesburg, Illinois; and numerous nieces and nephews. He was preceded in death by his parents, three brothers, Dale, Gene, and Theodore, and one sister, Ruth Ester Johnson. Cremation rites will be accorded and services will be held at a later date. Memorials may be made to the Monmouth Nursing Home or Trinity Lutheran Church, Galesburg, Illinois. Hurd-Hendricks Funeral Home and Crematory, Knoxville, Illinois is assisting the family. Online condolences can be made at www.hurd-hendricksfuneralhome.com To send flowers or a memorial gift to the family of Jerry R. Hanson please visit our Sympathy Store.
To send flowers to the family in memory of Jerry R. Hanson, please visit our flower store.