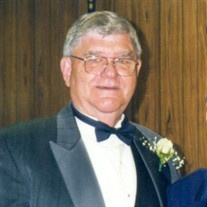 Jerald H. Benjamin, 83, of Knoxville, Illinois, died at 10:08 A.M. on Tuesday, April 25, 2017 at his home in Knoxville. Jerry was born on May 17, 1933 in Peoria, Illinois the son of Harley and Beulah (Doubet) Benjamin. He graduated from Williamsfield High School in 1951. He married Jean Self on May 19, 1952 in Dahinda, Illinois. Jerry then married Karen R. Sloan on January 29, 1971 in Williamsfield, Illinois. He was a farmer in Williamsfield, Illinois, he then worked for the Secretary of State, Department of Motor Vehicles in Galesburg, Illinois; he was a Knox County Deputy; he owned and operated JerDons and the Blue Angel Bar and Grill Galesburg, Illinois, then Jerry’s Restaurant from 1979 to 1995 on Galesburg Road; finally, selling Real Estate in the Knoxville area for many years. He was a member of the Harry Philblad American Legion Post #749 of Knoxville, Illinois and the VFW Post #8 of Galesburg, Illinois. He served in the Marines from 1952 – 1955. He loved to travel, and visiting Las Vegas. Jerry is survived by his wife, Karen Benjamin of Knoxville; his children, Bret (Donna Sue) Benjamin of Knoxville, and Amy (Walter) Nettles of Las Vegas, Nevada; five grandchildren, Brandi (Tim) Daugherty of Knoxville, Illinois, Dalton Nettles of Las Vegas, Nevada, Brandon and Nathan Benjamin of Knoxville, Illinois and Josh (Anna) Filson of Macomb; three great-grandchildren, Eric and Alyson Daugherty and Wyatt Filson; one brother, Rolland John Benjamin of Park Ridge, Illinois. He was preceded in death by his parents, one daughter, Ann Sloan and one Brother Hollis W. A Celebration of Life will be held on Saturday, April 29, 2017 from 11:00 A.M. to 1:00 P.M.at the Hurd-Hendricks Funeral Home Fellowship Center in Knoxville. Illinois. Graveside services will be held on Saturday, April 29, 2017 at 1:30 P.M. at the Williamsfield Cemetery, Williamsfield, Illinois with Rev. Chet Travis officiating. Military Rites will be conducted by the Williamsfield American Legion Post #371. Inurnment will be at the Williamsfield Cemetery in Williamsfield, Illinois. Memorials may be made to the American Legion Parking Lot Fund or the Galesburg Rescue Mission. Hurd-Hendricks Funeral Home & Crematory in Knoxville is charge of arrangements. On-line condolences may be made at www.hurd-hendricksfuneralhome.com To send flowers or a memorial gift to the family of Jerald H. Benjamin please visit our Sympathy Store.
To send flowers to the family in memory of Jerald H. Benjamin, please visit our flower store.