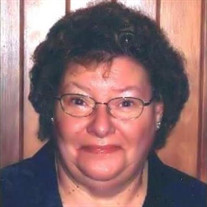 Janet Marie Hurd, age 77, of Galesburg, Illinois, died at 1:43 A.M. on Tuesday, March 19, 2019 at the Rosewood Care Center in Galesburg. On August 25, 1941, Janet was born in Knox County, Illinois, the daughter of Kenneth Leroy and Grace Bertha (Stephens) Chase. She was reared and educated in the Knox County area. In 1959, she was married to Norman Earnst in Knoxville, Illinois. He preceded her in death. She was later married to Donald Hurd in Rock Falls, Illinois. He also preceded her in death. Janet is survived by her two sons: Jimmy Earnst of Galesburg, Harold Earnst of Kissimmee, Florida; two granddaughters: Brittany Earnst, Amber Earnst; and her five siblings: Sharon (and Randy Brazee) Crawford of Oneida, Illinois, Steve (and Barb) Chase of Tulsa, Oklahoma, Larry Chase of Peyton, Colorado, Kenney Chase of Galesburg, and Crystal (and Scott) Walker of Festus, Missouri. She was preceded in death by her parents; and both of her husbands. She worked as a laborer at the Frantz Manufacturing and Garage Door Parts in Rock Falls, Illinois for a time, and also as a hostess at the Friendship House. However, Janet’s true calling was being a homemaker. She loved taking care of her family and cooking delicious meals for them. She also greatly enjoyed traveling. Cremation rites will be accorded. A Graveside Memorial Service will be held at 2:00 P.M. on Wednesday, April 3, 2019 at the Memorial Park Cemetery in Galesburg, Illinois. Memorial contributions may be made to the Good News Baptist Church in Galesburg. To send flowers or a memorial gift to the family of Janet Marie Hurd please visit our Sympathy Store.
To send flowers to the family in memory of Janet Marie Hurd, please visit our flower store.