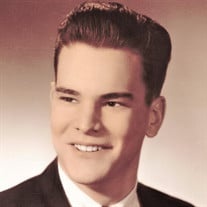 James K. “Sully” Sullivan, age 72, of Knoxville, Illinois, passed away at 9:24 A.M. on Sunday, August 12, 2018 at his home in Knoxville. Sully was born on September 17, 1945 in Cedar Rapids, Iowa, the son of Harry Francis and Patricia B. (Kempter) Sullivan. He married Jackie P. Johnson on July 16, 1982 in Chicago, Illinois. She preceded him in death on August 27, 2016. Surviving are his children: Deanna L. “Dee” (Lloyd) Moczarny of Galesburg, Illinois, Douglas B. Brown of North Carolina, Deborah (Darren) Thornton of Gautier, Mississippi, James M. (Victoria) Sullivan of Galesburg, and Sean Sullivan of Schererville, Indiana; seven grandchildren; two great-grandchildren; his brother, Paul (Harriet) Sullivan of Dubuque, Iowa; a sister-in-law, Deborah L. (Mark) Lang of Rock Island, Illinois; and a brother-in-law, Paul E. Johnson of Texas. He was preceded in death by his parents and wife. He attended DePaul Academy and then enlisted in the United States Navy, serving from 1963 to 1968. After his return to civilian life, he worked as a communications technician at Motorola for seven years and also went to school to become an EMT so that he could help others. After graduating, Sully worked as a firefighter and paramedic in the Chicago Fire Department for sixteen years, until his retirement in 1991. Additionally, he served as an instructor and coordinator at the Wilbur Wright College for the EMS-Paramedic program in north Chicago. After retiring he went on to work for the Illinois Masonic Hospital for thirteen years, and later moved to Knoxville with his wife, Jackie. Sully was also an ordained minister and served as First Vice Commander of AMVets Post #8. A Celebration of Life will be held on Friday, August 17, 2018 from 12:00 to 5:00 P.M. at the Hurd-Hendricks Fellowship Center in Knoxville, Illinois. Military rites will be conducted at 5:00 P.M. Memorials may be made to the CFFU Charity Fund. To send flowers or a memorial gift to the family of James "Sully" Sullivan please visit our Sympathy Store.
To send flowers to the family in memory of James "Sully" Sullivan, please visit our flower store.