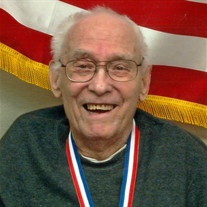 James J. Breeden, age 90, of East Galesburg, Illinois died at 11:40 A.M. on Tuesday, March 15, 2016 at the Knox County Nursing Home in Knoxville, Illinois. He was born on December 4, 1925 in Keokuk, Iowa the son of Orville Wesley and Carrie Baker Breeden. He attended and graduated from St. Patricks Schools in 1944 in St. Patricks Missouri. He married Esther B. Hensley on October 8, 1959 in Wayland, Missouri. She preceded him in death on January 13, 2015. Surviving is a daughter, Sherry Peacock of Knoxville; and one son: Mark Breeden of Nashville, Tennessee; two grandchildren: Justin Funk of Abingdon, Illinois and Shawna Peacock of Knoxville, Illinois; one great granddaughter: Janiyah Davis; and one brother Donald (Kathy) Breeden of Knoxville. He was preceded in death by his parents, his wife, a twin brother, John William Breeden; a brother, Robert Breeden, and two sisters, Anna Rockhold and LeVeta Breeden. He was an Administrative and Supply Technician for the 85th Training Division for the U.S. Army Reserves retiring in 1990. He also worked for the VA Hospital, the former Outboard Marine Co., Knox College and Admirals. He was a lifetime member of the VFW #2257 of Galesburg, Illinois. He served in the United States Army during World War II from 1950 until 1952 serving duty at Thule A.F. Base in Greenland, and in Japan in the Ordinance Department. Visitation will be from 2:00 P.M. until 4:00 P.M. on Sunday, March 20, 2016 at the Hurd-Hendricks Funeral Homes & Crematory in Knoxville, Illinois. Graveside Memorial Services will be held on Monday, March 21, 2015 at 11:00 A.M. at the Knoxville Cemetery, Knoxville, Illinois. Military Rites will be conducted at the Cemetery. On-line condolences and sympathy cards may be sent through www.hurd-hendricksfuneralhomes.com To send flowers or a memorial gift to the family of James J. Breeden please visit our Sympathy Store.
To send flowers to the family in memory of James J. Breeden, please visit our flower store.