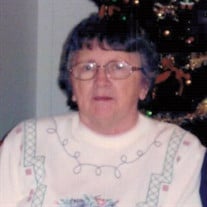 Jacqueline J. “Jackie” Toland, age 91, of Knoxville, Illinois died at 12:55 A.M. on Thursday, April 21, 2022 at her son’s home in Oneida, Illinois. She was born on October 23, 1930 in Astoria, Illinois the daughter of Fenton and Edna M. (Beadles) Gilson. She attended and graduated from Astoria High School in 1948. She married Robert L. Toland on December 11, 1948 at the Rushville Methodist Church Parsonage in Rushville, Illinois. He preceded her in death on August 29, 2010. Surviving is a son, Greg (Liz) Toland of Oneida, Illinois; a daughter, Alicia “Kay” (Jerry Cook) Lamberson of Keithsburg, Illinois; nine grandchildren, thirty-one great-grandchildren, and eight great-great-grandchildren; one brother-in-law, Don Toland of Monmouth, Illinois; numerous nieces and nephews. She was preceded in death by her parents, husband, one great-granddaughter, Maci Mulvey, four brothers, four sisters, three half-sisters and one half-brother. She worked as a Child Care Aide at the former Research Hospital in Galesburg, Illinois. She was member of the First United Methodist Church in Knoxville, Illinois. She enjoyed crocheting and for twenty-five years playing in her pinnacle female card club. She loved games of all kinds, and going to the casinos. She enjoyed going to flea markets with her husband. Graveside Funeral Services will be held at 1:00 P.M. on Monday, April 25, 2022 at the Knoxville Cemetery, Knoxville, Illinois. Burial will be in the Knoxville Cemetery, Knoxville, Illinois. Memorials may be made to the Children’s Miracle Network or to the Family. Hurd-Hendricks Funeral Homes & Crematory have been entrusted with her arrangements. On-line condolences and/or expressions of sympathy may be sent through www.hurd-hendricksfuneralhome.com To send flowers or a memorial gift to the family of Jacqueline J. "Jackie" Toland please visit our Sympathy Store.
To send flowers to the family in memory of Jacqueline J. "Jackie" Toland, please visit our flower store.