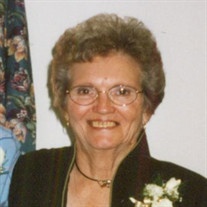 Ida B. Hendricks, 84, of Altona, Illinois died on Saturday, May 07, 2016 at her residence in Altona, Illinois. Ida was born on March 29, 1932 in Madisonville, Tennessee, the daughter of Charlie and Laura Bruce Lovingood. She was raised and educated in North Carolina and Tennessee. She married J. R. “Jay” Hendricks on August 20, 1955 in Athens, Tennessee. He preceded her in death on May 9, 2008. She is survived by three daughters, Carol (Rick) Trego of Abingdon, Illinois, Peggy (Eric) Johnson of Victoria, Illinois, and Diane (Jim) Andrews of Altona, Illinois; two sons, Davis (Phyllis) Hendricks of Washington, Illinois and Alvin (Penny) Hendricks of Oneida, Illinois; seven grandchildren, Amber, Noah, and Logen Hendricks; April Douglass; Nick Johnson; Daniel and Makinzy Andrews; one great granddaughter, Mallory Douglass; one brother, Charles (Rheba) Lovingood of Rogersville, Tennessee; numerous nieces and nephews; and special friends, Linda Gail and Bill Swanson, Cathy Hale, and Becky and John Benson. She was preceded in death by her parents, husband, and one sister, Etta Sue Stanley. Ida first worked at Caterpillar in East Peoria for 8 years she then went on to work at Maytag for 29 years retiring in 1995. Ida was a member of the First Christian Church in Knoxville, Illinois. She also belonged to the Red Hats Society in Knoxville and attended the senior citizen group in Altona. Ida loved doing crafts, sewing, and quilting. Funeral services will be held on Tuesday. May 10, 2016 at 11:00 A.M. at Hurd-Hendricks Funeral Home in Oneida, Illinois. Rev David Schreeves officiating. Visitation will be held on Monday, May 9, 2016 from 5:00 P.M. to 7:00 P.M. at Hurd-Hendricks Funeral Home, Oneida, Illinois. Burial will be at the Walnut Grove Cemetery in Altona, Illinois. Memorials may be made to the American Cancer Society, Hospice Compassus, or First Christian Church, Knoxville. Online condolences may be made at www.hurd-hendricksfuneralhome.com To send flowers or a memorial gift to the family of Ida B. Hendricks please visit our Sympathy Store.
To send flowers to the family in memory of Ida B. Hendricks, please visit our flower store.