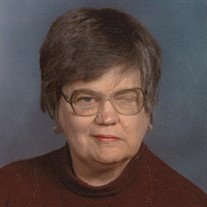 Helen Wagner, age 79, of Knoxville, Illinois, passed away on October 18, 2017 at 12:02 P.M.at OSF Saint Mary Medical Center in Galesburg, Illinois. She was born on August 25, 1938 in Vandalia, Illinois, the daughter of Reverend Alvin Carl and Louise Margarete (Nicol) Meier. Helen became a librarian and also taught in the Chicago area. She married James Wagner in July of 1962 at Grace Lutheran Church in Chicago, Illinois. He preceded her in death in August of 2016. Helen is survived by her two sons: Keith (Melanie Franklin) Wagner of Aurora, Illinois, Christopher (Christine) Wagner of Claredon Hills, Illinois; one grandson: Mark Wagner of La Moille, Illinois; and three siblings: Charlotte (Charles) Gruner of Knoxville, Illinois, Lois (Nick) Kendellen of Chicago, Illinois, and Arthur (Doris) Meier of Hoyleton, Illinois. She was preceded in death by her parents, husband, and one brother: Keith Meier. She attended the Grace Lutheran Church in Knoxville and was also a member of MENSA. She enjoyed needlework, reading, and supporting many forms of the liberal arts including art, opera, and theater. Cremation rites will be accorded. A Memorial Service will be held on Tuesday, October 24, 2017 at 11:00 A.M. at the Grace Lutheran Church in Knoxville, Illinois, Pastor Clark officiating. Memorial contributions can be made to the Grace Lutheran Church. Hurd-Hendricks Funeral Home and Crematory in Knoxville, Illinois is assisting the family. Online condolences or expressions of sympathy can be made through www.hurd-hendricksfuneralhome.com. To send flowers or a memorial gift to the family of Helen Wagner please visit our Sympathy Store.
To send flowers to the family in memory of Helen Wagner, please visit our flower store.