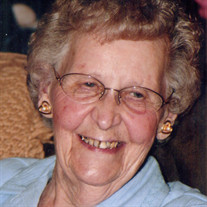 Helen C. Peterson, 98, of Knoxville, Illinois passed away at 6:50 P.M. on Tuesday, December 27, 2016 at the Courtyard Estates of Knoxville. She was born on June 7, 1918 in rural Rio, Illinois to William Leafgreen and Estella Swanson Leafgreen. She attended and graduated from Rio High School. Helen married Marvin A. Peterson on April 16, 1938 in Davenport, Iowa. He preceded her in death on December 19, 2006. She is survived by her children, Milton (Judith) Peterson of East Galesburg, Illinois and Carolyn Davis of Knoxville, Illinois; five grandchildren, fourteen great-grandchildren and one great-great grandchild; siblings, Pauline Sheridan of Galesburg, Illinois, Elizabeth (Don) Robinson of Woodhull, Illinois, Marian Link of Galesburg, Illinois and George Leafgreen of Galesburg, Illinois. Helen was preceded in death by her parents, her husband, two brothers, Dick and Harvey; one adopted brother, Vincent Olson and one infant brother, Carl Fredrick Leafgreen. Helen was an active member of the Grace Lutheran Church in Knoxville, Illinois, assisting in both Sunday school and bible study. She was also a member of the Spoon Sister`s Club. A private graveside service was held on Saturday, December 31, 2016 at Oaklawn Memorial Gardens in Galesburg, Illinois. A memorial service will be held on Sunday, January 15, 2017 at 2:00 P.M. at the Grace Lutheran Church in Knoxville, Illinois. Memorials may be made to the Grace Lutheran Church in Knoxville, Illinois. Online condolences can be left at www.hurd-hendricksfuneralhome.com To send flowers or a memorial gift to the family of Helen C. Peterson please visit our Sympathy Store.
To send flowers to the family in memory of Helen C. Peterson, please visit our flower store.