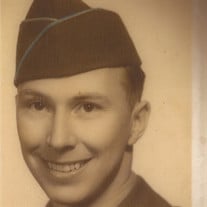 H. Dean Stegall, age 86 of Oneida, Illinois died at 7:22 A.M. on Friday, November 24, 2017 at Galesburg Cottage Hospital, Galesburg, Illinois. Dean was born on July 31, 1931 in Galesburg, Illinois the son of Forrest and Doris (Mosher) Stegall. He attended and graduated from Victoria High School in 1948. He married Sandra Donahue on April 28, 1957 at the United Methodist Church in Oneida, Illinois. Surviving is his wife: Sandra Stegall of Oneida, Illinois; one daughter, Gaye Ellen (Jim) Henson of Oneida, Illinois; two grandchildren: Kaitlin (Tim) Denning of New London, Iowa and Brendan Henson of Oneida, Illinois; two great granddaughters: Kolbey Rae and Kwincey Grace Denning; two nieces: Kae (Jim) Hankes of Galesburg, Illinois and Diane (Rick) Soltau of Davenport, Iowa; three nephews: Larry (Carol) Stegall of Tennessee, Dan (Gina) Donahue of Davenport, Iowa, and Tim (Patti) Donahue of Davenport, Iowa. He was preceded in death by his parents, one son: David Alan; one brother, Leslie; and one nephew Mike Donahue. Dean farmed in the Victoria and Oneida area. He served in the United States Army during the Korean War. He was a member of the Rylander-Milroy American Legion Post #727 and the Oneida Masonic Lodge and the Alpha Masonic Lodge of Galesburg, Illinois. He was a 32nd Degree Mason. He enjoyed watching NASCAR and following Matt Kenseth; an avid Iowa Hawkeye Basketball and Football fan. Funeral Services will be held at 11:00 A.M. on Thursday, November 30, 2017 at the Hurd-Hendricks Funeral Homes & Crematory in Oneida, Illinois, with Karna Peterson officiating. Visitation will be from 10:00 to 11:00 A.M. with Masonic Services beginning at 11:00 A.M. Inturnment will be held at a later date. Memorials may be made to the Oneida-Wataga Fire Department or to the Altona-Oneida-Wataga Ambulance Service. To send flowers or a memorial gift to the family of H. Dean Stegall please visit our Sympathy Store.
To send flowers to the family in memory of H. Dean Stegall, please visit our flower store.