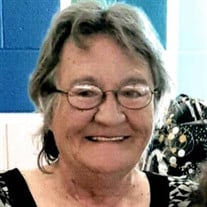 Gloria Jean Lapping, age 70, of Galesburg, Illinois died at 3:45 A.M. on Monday, January 13, 2020 at the OSF Saint Francis Medical Center in Peoria, Illinois. She was born on August 2, 1949 in Galesburg, the daughter of Earl L. and Mary (Mustapich) Steele. She married Richard Paul VanBevern on April 27, 1974 in Henderson Grove, Illinois. He preceded her in death. She then married Robert Joseph Lapping on November 7, 2009 at St. Patrick Catholic Church in Galesburg. Surviving is her husband, Robert Lapping of Galesburg; three children: Brian Paul (April Johnson) VanBevern of Macomb, Illinois, Christopher Paul (Toni) VanBevern of Alpha, Illinois, Pamela Jean (Chris) Carlock of Astoria, Illinois; step-children: Alan, Rhonda and Tom VanBevern and Scott, Jeff and Brian Lapping; five grandchildren; and two great-grandchildren. She was preceded in death by her parents and one brother, Michael. Gloria attended Saint Patrick Catholic Church in Galesburg with her husband. She enjoyed collecting many different items and also working on puzzles of all kinds. She loved animals and greatly enjoyed bird watching. Visitation will be held from 10:00 A.M. to 11:00 A.M. on Thursday, January 16, 2020 at the Hurd-Hendricks Funeral Home in Knoxville. The funeral service will directly follow at 11:00 A.M. Father William Miller will officiate. Interment will be at the Oneida Cemetery. Memorial contributions may be made to the Knox County Humane Society or to the family. To send flowers or a memorial gift to the family of Gloria Jean Lapping please visit our Sympathy Store.
To send flowers to the family in memory of Gloria Jean Lapping, please visit our flower store.