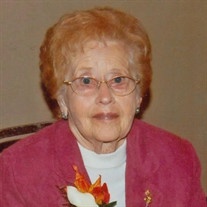 Gertrude L. Moffitt, 97, died Monday, January 2, 2017 at 3:15 P.M. at the Knox County Nursing Home in Knoxville, Illinois. Gertrude was born on November 9, 1919 the daughter of Charles and Nellie (Rankin) Johnson of Stronghurst, Illinois. She had two brothers, Howard (Esther) and Dale (Helen) and one sister, Jennie (Gene) Flake. She married Russell W. Moffitt on July 3, 1941. They had two sons, James R. and Donald L. She was preceded in death by her parents, siblings, one son, and her husband. She is survived by her son Don (Carolyn) Moffitt of Gilson; three grandchildren, Londa (Michael) Mauriello of Mundelein, Illinois, Justin (Jennifer) of Gilson, Illinois and Amanda (Lance) Setterdahl of North Henderson, Illinois; eight great-grandchildren, numerous nieces, nephews, great nieces, nephews and great great nieces and nephews. Gertrude graduated from Biggsville High School in 1937 and began working at Rankin`s Grocery and then the post office in Biggsville, Illinois. Gertrude helped her husband with a trucking business and then as partner in farming. After moving to Knox County she worked at the Trading Post Grocery, Galesburg Soft Water and J.C. Penny`s for many years. After retirement she spent many hours keeping the Gilson farmstead manicured. She was a member of the Knoxville United Methodist Church, the Knox County Farm Bureau and the former G.T. Club. Visitation will be held from 4:00 P.M. – 6:00 P.M. on Thursday, January 5, 2017 at the Hurd-Hendricks Funeral Home in Knoxville, Illinois. A funeral service will be held at 10:00 A.M. on Friday, January 6, 2017 at the Knoxville Methodist Church in Knoxville, Illinois. Pastor Michael Mauriello and Pastor Dan Lybarger will officiate. Interment will be at Memorial Park Cemetery in Galesburg, Illinois. Memorials may be made to the Knoxville Community Fund at Galesburg Community Foundation, the Endowment Fund at Knoxville United Methodist Church or the Knoxville Community Fire Protection District. Online condolences may be sent through www.hurd-hendricksfuneralhomes.com To send flowers or a memorial gift to the family of Gertrude L. Moffitt please visit our Sympathy Store.
To send flowers to the family in memory of Gertrude L. Moffitt, please visit our flower store.