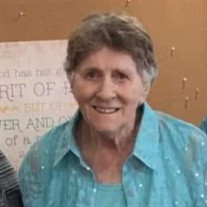 Geraldine “Geri” Kistler, 75, of Galesburg, died on Friday, August 14, 2020, 12:39PM, at Seminary Manor, Galesburg. Geri was born on July 20, 1945, in Burlington, IA. She was the daughter of Dean and Ruth (Canfield) Gibson. Geri married Arlan “Bit” Kistler on August 10, 1991 in Victoria. Together they celebrated 24 years of marriage, before his death on May 9, 2015. Geri is survived by her children, Tina (Ross) Johnson of Rock Island, and Russell (Amy) Trulson of Oquawka; stepchildren, Todd (Shirley) Kistler of Altona and Darin (Donna) Kistler of LaFayette; siblings, Sharon Banta of Oquawka, Marilyn Jo Burke of Winchester, and Cindy Dowdy of Cullman, AL; six grandchildren; and five great-grandchildren. Along with her husband, she was preceded in death by her parents and sisters, Donna Patricia Smith and Diane J. Hargrove. Geri lived most of her life in Oquawka and attended Burlington Schools. She worked as a laborer for Butler Manufacturing, until their shut down in 2000. She then went on to achieve her AAS in Adminstration from Carl Sandburg College, and work for the USPS in Victoria. She was a member of the Steel Workers Union #225 where she served as Union Secretary. Visitation will be held on Saturday, August 22, 2020, from 10 AM to 12 PM, at Hurd-Hendricks Funeral Homes and Crematory, Knoxville. Funeral service will follow visitation at 12:30 PM at the funeral home. Cremation rites will be accorded after services. Memorials may be donated to the Wounded Warriors Project. Condolences may be left to the family at www.hurd-hendricks.com. To send flowers or a memorial gift to the family of Geraldine "Geri" Kistler please visit our Sympathy Store.
To send flowers to the family in memory of Geraldine "Geri" Kistler, please visit our flower store.