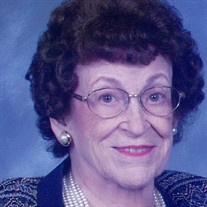 Georgia Irene Schleich, 98, of Fairview, IL died on Wednesday, December 21, 2016 at 9:25 PM in Graham Hospital Long Term Care in Canton, IL. She was born on May 9, 1918 in rural Norris, IL, the daughter of Andrew Jackson and Harriet “Hattie” Lavina Conelly Stone. She married John Robert Schleich on October 27, 1948 in Fairview, IL. He preceded her in death on April 5, 2012. Surviving are: one daughter, Harriett Lee Schleich of Fairview, IL, several nieces, nephews, great nieces, great nephews, cousins, as well as several nurses, caregivers and neighbors who have become a part of the family. She was preceded in death by her parents; one sister: Vernice Slater and one brother: Claudie Stone. She was raised and educated in Fairview, IL graduating from the Fairview Community High School in 1936. She was involved in many community activities after graduating and during World War II, which included 4-H clubs, making bandages for Red Cross, and sending care packages to area soldiers. Then during the Great Depression, she experienced the aluminum drives and rationing of commodities as well as hard times. Her lifetime has spanned the time before electricity and running water in the house to the age cell phones and I-pads which she tried to master. She lived in Canton, IL for a short time before her marriage to John and worked at Scripps-McCartney Department Store. Then in 1948, she became a farm wife and moved to the farm in rural Fairview, IL where she lived the rest of her life. She was a very good cook, baker and made great pies. Her garden provided food for preserving and canning for many years. She liked to sew, crochet, knit and make crafts. She also enjoyed jigsaw, crossword and word find puzzles. She was a member of the First Christian Church in Canton, Illinois and formerly a member of the Reformed Church in Fairview, IL. She belonged to the Reformed Church Guild for several years. She was initiated into Fairview Chapter # 99, Order of the Eastern Star of Illinois on March 7, 1939. She served as Worthy Matron twice, holding several other offices before she was Secretary for over 40 years. She was a 77 year member. Funeral Services will be held on Tuesday, December 27, 2016 at 11:00 AM at the First Christian Church in Canton, IL. Rev, Glenn Nestlerode officiating. Visitation will be held on Monday, December 26, 2016 from 5 to 7 PM at Sedgwick Funeral Home in Canton, IL with Eastern Star Services to be held at 6:30 PM Burial in Fairview Cemetery in Fairview, IL. Memorials may be made to the First Christian Church in Canton, Eastern Star Home Pavilion Fund or Graham Hospital Long Term Care. Arrangements by Hurd-Hendricks Funeral Home in Knoxville, IL and Sedgwick Funeral Home in Canton, IL. To send flowers or a memorial gift to the family of Georgia Irene Schleich please visit our Sympathy Store.
To send flowers to the family in memory of Georgia Irene Schleich, please visit our flower store.