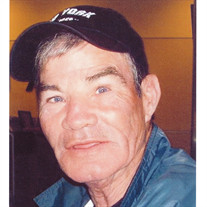 Gary L. Smith, 64, Galesburg, passed away Saturday, February 10, 2018, 12:13 A.M. in Galesburg. He was born August 2, 1953, in Avon, to Floyd J. and Dorothy Lockwood Smith. Gary was a simple man with a simple life but he was ours. He married Rose Link in 1975 and they had a son Shawn, who he considered his greatest achievement. He married Patricia Crow on June 8, 1990 and helped raise her children. He was preceded in death by his parents, brothers Floyd and Dennis and infant sister Barbara. He is survived by his wife Patricia, son Shawn, Madison, Indiana, his stepchildren that he helped raise, Brandie (Corey) Fox, Galesburg, Christopher (Kim) Qualls, Charlotte, NC, Tabitha (Marshall) Jozwick, Macomb, Angela (Josh) Crossen, and Jennifer (Ray Stinson) Cooper, both of Monmouth, his siblings, Linda Kniss, Sandra (Don) Brittingham, and James (Ruth) Smith, all of Galesburg and fourteen grandchildren. Gary loved watching westerns, fishing, and camping in his earlier years and traveling anywhere his wife and the YaYa sisters took him. Cremation rites were accorded with the Hurd-Hendricks Funeral Home in Knoxville, Illinois. The family will share memories of his life and then a meal Saturday, February 17, 2018 at 1:00 P.M. at the First Church of God on Harrison Street in Galesburg. Memorial Contributions may be made to the family or to OSF Hospice. Online condolences can be left at www.hurd-hendricksfuneralhome.com To send flowers or a memorial gift to the family of Gary Smith please visit our Sympathy Store.
To send flowers to the family in memory of Gary Smith, please visit our flower store.