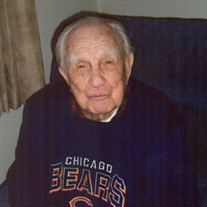 Frederick R. “Fred” Scalf, 99, of Galesburg, formerly of Knoxville, Illinois died at 7:09 P.M. on Tuesday, December 27, 2016 at the Knox County Nursing Home in Knoxville, Illinois. He was born on January 26, 1917 in Kirkwood, Illinois to his parents Hale and Mae Evans Scalf. He attended and graduated from Kirkwood High School. On September 6, 1935 Fred married Margaret A. “Maggie” Sward in Monmouth, Illinois. She preceded him in death on June 6, 1998. Fred is survived by his children, Elizabeth “Tootie” Harshbarger of Galesburg, Illinois, Barbara Howarter of Maryville, Tennessee, Fred (Carrol) Scalf of Riverview, Florida and Bud Scalf of Galesburg, Illinois; fifteen grandchildren, nineteen great-grandchildren, nineteen great-great-grandchildren and many nieces and nephews. He was preceded in death by two sons; James and Jerry, his parents, his wife, three sisters and four brothers. Fred farmed for many years in rural Maquon, Illinois. He then worked for 28 and a half years at Butler`s in Galesburg, Illinois, retiring in 1978. Fred enjoyed spending his time golfing. Funeral services will be held at 11:30 A.M. on Tuesday, January 3, 2017 at the Hurd-Hendricks Funeral Home in Knoxville, Illinois. Visitation will be held an hour and a half prior to the funeral service. Interment will be held at 1:00 P.M. on Wednesday, January 4, 2017 at the Knoxville Cemetery in Knoxville, Illinois. Memorials may be made to St. Jude`s Children Hospital. Online condolences can be left at www.hurd-hendricksfuneralhome.com To send flowers or a memorial gift to the family of Frederick R. Scalf please visit our Sympathy Store.
To send flowers to the family in memory of Frederick R. Scalf, please visit our flower store.