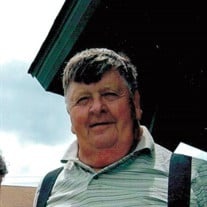 Franklin W. “Tweety” Olin, age 81, of Knoxville, Illinois died at 3:14 A.M. on Monday, July 6, 2020 at his home in Knoxville, Illinois. Frank was born on June 11, 1939 in Knoxville, Illinois the son of Walter C. and Stella E. (Carter) Olin. He attended and graduated from Knoxville High School, the class of 1957. He married Phyllis D. Hiatt on October 18, 1975 at the First Christian Church in Knoxville, Illinois. She preceded him in death on March 24, 2007. Surviving are his children: Vicki L. Johnson of Knoxville, Illinois, Daniel L. (Kathy) Snider of Alexis, Illinois, William R. Snider of East Galesburg, Illinois, Trudy (David) Buress of Springfield, Missouri, and Mark (Rhonda) Olin of Victoria, Illinois; seven grandchildren, and ten great grandchildren. He is also survived by special friends, David and Leslie Wilt and many friends. He was preceded in death by his parents, wife and three brothers, and two sisters. Frank was employed at the former Maytag of Galesburg, Illinois, retiring after 39 years as a General Supervisor in 1997. He was a member of the East Galesburg Community Church and attended Grace Lutheran Church in Knoxville, Illinois. Frank served on the Knoxville City Council as Ward I Alderman from May of 2012 to April 2017 and served on the Cemetery Committee. He was involved in the Tree Project at the Knoxville Cemetery. Frank enjoyed working in his yard and gardening. He was an avid bowler for many years, winning the Illinois State Handicap Doubles Championship. He was member of the Illinois Bowling Association. Frank was also an avid golfer. He loved to bake pies; Frank made a mean homemade apple pie. No one was a stranger; Frank was a friend to everyone. Visitation will be held from 4:00 P.M. to 8:00 P.M. on Thursday, July 9, 2020 at the Hurd-Hendricks Funeral Homes & Crematory in Knoxville, Illinois. Private funeral services will be held on Friday, July 10, 2020 at the Hurd-Hendricks Funeral Homes & Crematory in Knoxville, Illinois. Interment will be in the Knoxville Cemetery, Knoxville, Illinois. Memorials may be made to the East Galesburg Community Church, Grace Lutheran Church or OSF Hospice. Due to COVID-19 restrictions, face masks and social distancing will be required. On-line condolences or expressions of sympathy may be made through www.hurd-hendricksfuneralhome.com To send flowers or a memorial gift to the family of Franklin W. "Tweety" Olin please visit our Sympathy Store.
To send flowers to the family in memory of Franklin W. "Tweety" Olin, please visit our flower store.