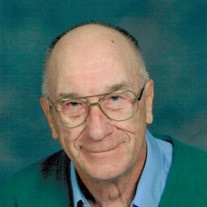 Franklin Delano Henderson, age 87, a long-time resident of Knoxville, Illinois died at 7:55 A.M. on Saturday, February 29, 2020 at McLean County Nursing Home in Normal, Illinois. He was born on March 2, 1933 in Lewistown, Illinois the son of Floyd Lee and Mary Ellen (Rutledge) Henderson. He was one of many namesakes of President Franklin Delano Roosevelt. He graduated from Spoon River Valley High School in 1950. He married Eleanor Jane Hutson on August 3, 1952 at the Knoxville United Methodist Church in Knoxville, Illinois. She preceded him in death on April 17, 2007. Surviving are his daughters: Karen (and Robert) Kennedy of Alcoa, Tennessee, Martha (and Steven) Thomas of Farmington, New Mexico, Lisa (and Carl) Hinshaw of Heyworth, Illinois, Amy (and Gregory) Lomax of Sturgis, Michigan; six grandchildren: Scott (and Leah) Thomas of Farmington, New Mexico, Kevin (and Saba) Thomas of Albuquerque, New Mexico, Geoffrey (and Patricia) Kennedy of Knoxville, Tennessee, Molly (and Alan) Ivan of Willard, Ohio, Matthew (and Maria) Lomax of Grand Island, Nebraska, Clarissa Hinshaw of Los Angles, California; twelve great-grandchildren; one sister, Marilyn Goetze of Elmwood, Illinois. He was preceded in death by his parents and his wife. He worked at the former Maytag in Galesburg, Illinois retiring in 1996. While working at Maytag he also farmed until he retired in 1977. He was a member of the Knox County Farm Bureau. He was an active member of the Knoxville United Methodist Church. For many years he was on local bowling and golf league. Visitation will be held on Wednesday, March 4, 2020 from 6:00 to 8:00 P.M. at the Hurd-Hendricks Funeral Homes and Crematory in Knoxville, Illinois. Funeral services will be held on Thursday, March 5, 2020 at 10:00 A.M. at the Hurd-Hendricks Funeral Homes and Crematory in Knoxville, Illinois with Rev. David Mustain officiating. Memorial contributions may be made to the Knoxville United Methodist Church, Knoxville, Illinois. Online condolences and expressions of sympathy may be made through www.hurd-hendricksfuneralhome.com. To send flowers or a memorial gift to the family of Franklin Delano Henderson please visit our Sympathy Store.
To send flowers to the family in memory of Franklin Delano Henderson, please visit our flower store.