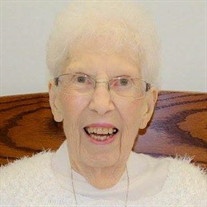 F. Louise “Weezy” Buckman, age 90, of Maquon, Illinois died at 2:45 A.M. on Saturday, February 25, 2017 at her home in Maquon, Illinois surrounded by her family. Louise was born on December 11, 1926 in Williamsfield, Illinois the daughter of Theodore G. and Mathilda Adolphson Swanson. She graduated from Maquon High School. She married Clifford J. Buckman on May 26, 1946 in Victoria, Illinois. He preceded her in death on July 17, 2012. Surviving is a daughter, Joyce (Danny) Richard of Maquon, Illinois; six grandchildren: Aaron (Leslie) Taylor of Maquon, Illinois, Dee Dee (David) Boyer of Maquon, Illinois, Neil (Susi) Taylor of Maquon, Illinois, Tiffany (Kristina) Buckman of Galesburg, Illinois, Donald Taylor of Fairview, Illinois and Jarod (Kari) Buckman of Maquon, Illinois: and fourteen great grandchildren: Devin (Jill) Stowe, Courtney Taylor, Drew Martin, Ethan and Bella Boyer, Austin and Mattie Taylor, Dalton and Kolbie Buckman, Tony Nicholas, Quinn, Drew and Brock Anderson. She was preceded in death by her parents, husband, one son, James, five brothers and five sisters. She attended Illinois State University in Normal, Illinois. Then, she taught school in and around the Maquon and Yates City area for seven years and also worked for the Catalog Department at Dick Blick in Galesburg, Illinois for 31 years up until December of 1989. Louise enjoyed baking anything from delicious gourmet pies to Christmas cookies, flavored fudge and candies (and her potato salad is one for the books – most all of us can easily vouch for that). She took delight in sharing and teaching her baking skills and the occasional beer or glass of wine from the company that stopped by to see her. It’s the time with her family and friends that she loved the most. Member of the former Good Cheer Club and the Knox County Home Farm Bureau. Funeral services will be held at 11:00 A.M. on Wednesday, March 1, 2017 at the Hurd-Hendricks Funeral Homes and Crematory in Knoxville, Illinois the Rev. Dan Doty will officiate. Visitation will be held from 6:00 P.M. to 8:00 P.M. on Tuesday, February 28, 2017 at the Hurd-Hendricks Funeral Homes & Crematory in Knoxville, Illinois. Burial will be in the Maquon Cemetery, Maquon, Illinois. Memorials may be made to the St. Jude’s Children’s Hospital or the Maquon United Methodist Church. To send flowers or a memorial gift to the family of F. Louise "Weezy" Buckman please visit our Sympathy Store.
To send flowers to the family in memory of F. Louise "Weezy" Buckman, please visit our flower store.