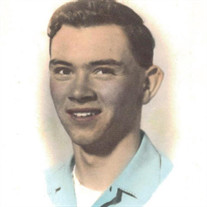 Eugene “Pete” Holt, age 91, of Oneida passed away peacefully at home on May 14, 2021. He was the devoted husband of Betty Lou (Clark) Holt for 68 years before her passing in 2019. Betty Lou would often say that when they met, an angel tapped her on the shoulder and said “He is the one for you.” Their subsequent life together was one characterized by family, faith, and mutual care. Together they built a family including Gary (Marilyn) Holt, Rio; Margaret Holt Karbeling (Robert Belosky), Clive, Ia.; Barbara (Daniel) Snyder, Indianapolis, In; Michael (Kathleen) Holt, Woodhull; and Betsy Holt (Desmond Nicotera) of Littleton, Co.; 12 grandchildren and their spouses; and eight great grandchildren. His family knew him as a wonderful storyteller; great teacher; kind, generous, and conscientious steward of all things entrusted to his care; lifelong learner; creative thinker and maker; and, lover of all dogs, wild birds, and some cats. Gene was the founder of the Happy Pig Collectors Club, an international organization whose motto includes the giving of respect to the phrase, “When I see a pig, I think of you.” His collection started with the purchase of a dime-store piggy bank when he was a child and it grew to include thousands of interesting, quirky, and colorful pigs and pig related items. His enthusiasm for the search and acquisition of these collectables gave him a great deal of joy, especially in his retirement years. Holt was a lifelong resident of Ontario township where he was the third generation of farmers on the home place that is now managed by his sons. He was a member of the township board for many years as well as a long-term member of the Ontario Cemetery board. He was honored as a member of the Knox County Pork Producers Hall of Fame and was very active with Knox County 4-H. His faith was formed at the Ontario Congregational Church, and later he worshipped at the Immanuel Lutheran Church of Altona. After graduating with the Oneida High School Class of ’47, he worked on the CB&Q railroad as a fireman. Then he was called to serve in the Army helping to rebuild Europe at the time of the Korean conflict. Upon returning from service he returned to the family farm. He was an active member of the Rylander-Milroy American Legion Post #727 where he served as a Commander and was an enthusiastic promoter of their fish fries. He proudly led the effort to create the Veteran’s Memorial in Oneida. His legacy of service, devotion, and fun will live on through his family, civic projects, and those who knew and loved him. Funeral service will be at noon Saturday, May 29,2021, at Immanuel Lutheran Church in Altona. A visitation will precede the service, beginning at 10:30 a.m. at the church. The private interment will be at Ontario Cemetery later in the day. In lieu of flowers, memorial contributions may be made to the Carl Sandburg Foundation Betty Lou Holt Scholarship (for nurses’ training), the Galesburg Rescue Mission, or St. Jude’s Children’s Research Hospital. Hurd-Hendricks Funeral Homes & Crematory is assisting the family with their services. On-line condolences and/or expressions of sympathy may be sent through www.hurd-hendricksfuneralhome.com To send flowers or a memorial gift to the family of Eugene "Pete" Holt please visit our Sympathy Store.
To send flowers to the family in memory of Eugene "Pete" Holt, please visit our flower store.