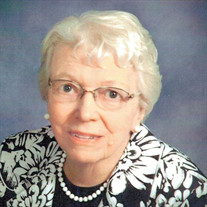 Erma J. Johnson, age 90, of Galesburg, Illinois died at 5:49 P.M. on Thursday, May 13, 2021 at Courtyard Estate in Knoxville, Illinois. Erma was born on December 16, 1930 in Galesburg, Illinois the daughter of Clark and Kate (Cook) Sharp. She attended and graduated from Galesburg High School in 1948. She married Donald R. Johnson on April 3, 1949 at the First United Methodist Church in Galesburg, Illinois. He preceded her in death on November 14, 2013. Surviving is a daughter, Diana (Randy) Mason of Thornton, Colorado; two granddaughters, Kim (and Jennifer French) Indelicato of El Segundo, California and Jen Indelicato of Lakewood, Colorado; two twin great granddaughters, Madeline and Katherine Indelicato-French. She was preceded in death by her parents, husband, two brothers and one sister. Erma worked as a retail clerk for the former grocery stores, L & G, A & P, and National Tea in Galesburg, Illinois and assisted her husband in his businesses the former Honda Motor Shop and Grand Motor Sales in Galesburg, Illinois. She was a member of the First United Methodist Church since 1941 and a 50-year member of the Home Extension. Memorial Services will be held on Sunday, May 30, 2021 at 2:00 P.M. at the Hurd-Hendricks Funeral Homes and Crematory in Knoxville, Illinois, with Rev. Mary Runge officiating. Visitation will be from 1:30 PM until time of Services on Sunday, May 30, 2021. Private interment will be held at a later date at Linwood Cemetery in Galesburg, Illinois. Memorial contributions may be made to the First United Methodist Church and the Galesburg Rescue Mission. On-line condolences and/or expressions of sympathy may be sent through www.hurd-hendricksfuneralhome.com To send flowers or a memorial gift to the family of Erma J. Johnson please visit our Sympathy Store.
To send flowers to the family in memory of Erma J. Johnson, please visit our flower store.