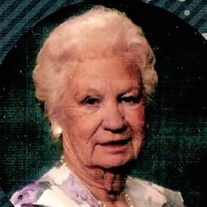 Elsie “Peg” B. Gibson, age 96, of Galesburg, Illinois, died at 5:28 P.M. on Monday, January 6, 2020 at the Galesburg Cottage Hospital in Galesburg. She was born on May 10, 1923 in Lincoln, Illinois, the daughter of Frank and Bertha (Kelso) Allison. She was reared and educated in the Lincoln area. On August 18, 1939, Peg was married to Leo G. Nelson in Oskaloosa, Iowa, and together they had three children; they preceded her in death. Peg was later married to Mark J. Gibson in Galesburg on June 25, 1977. Mark preceded her in death on December 29, 2000. Left to cherish Peg’s memory are her thirteen grandchildren: Russell (and Sue) Nelson, Jr., Candy (and Leo) Simmons, Patti (and Don) Dandurand, Shelby Rowland, Jon (and Shelley Ashbaugh) Nelson, Eddie Nelson, Missy (and Aaron) Hawn, Scott (and Heather) Weeks, Cindy Harwood, Doug (and Jan) Anderson, Michelle (and Jim) Power, Kimberly Niles, Lori (and Brian Fishburn) Nelson; forty-four great-grandchildren; fifty-one great-great-grandchildren; and compassionate friend and caregiver, Ellie Nelson. She was preceded in death by her parents; both husbands; her three children: Russell W. Nelson, Michael V. Nelson, Peggy J. Anderson; seven brothers; and two sisters. Peg worked as a Mental Health Technician for over thirty years at the former Galesburg Research Hospital and enjoyed her career there very much. She was an active member of AFSCME, as well as her church, the Faith United Methodist Church in Galesburg. She was also a member of the American Legion Auxiliary and the Wataga Senior Luncheon. Her family will remember her as an avid and dedicated Saint Louis Cardinals fan, as well as for her enjoyment of playing card games with her loved ones. Her life was full of love and laughter, and she will be greatly missed. Visitation will be held from 10:00 A.M. to 11:00 A.M. on Friday, January 10, 2020 at the Hurd-Hendricks Funeral Home & Crematory in Knoxville, Illinois. The funeral service will directly follow at 11:00 A.M., Rev. Norman Mendell officiating. Interment will be at the Knoxville Cemetery. Memorial contributions may be made to the Faith United Methodist Church. To send flowers or a memorial gift to the family of Elsie "Peg" B. Gibson please visit our Sympathy Store.
To send flowers to the family in memory of Elsie "Peg" B. Gibson, please visit our flower store.