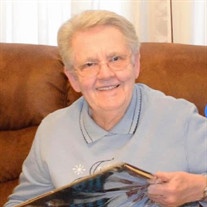 Elsie M. Holt, 93, of Galesburg, formerly of Altona, passed away on Tuesday, March 16, 2021, 7:40 AM, at Seminary Manor, Galesburg. Elsie was born on June 5, 1927 in Henderson Township, Knox County. She was the daughter of Arthur and Jessie (Halsey) Pumfrey. Elsie married Robert M. Holt in Cameron on December 26, 1948. Together, they celebrated 54 years of marriage. Elsie is survived by her children, Janice (Dennis) Anderson of Galesburg, Roger (Marna) Holt of Enola, PA, and Joyce Shorter of Clarksville, TN; seven grandchildren; eight great-grandchildren; and many nieces and nephews. She was preceded in death by her husband, parents, two sisters and three brothers. Elsie was a graduate of Alexis High School. She was a member of the First Presbyterian Church of Galesburg, where she served as a deacon and elder. Elsie was a proud farmers wife, helping her husband tend to their farm and home. Robert and Elsie were 50-year members of the Knox County Farm Bureau. She was also a volunteer with M.O.P.S. (Mothers of Pre-Schoolers) with Robert, and later with her ladies’ church group sewing lap robes. Cremation rites will be accorded. A memorial service will be held 11:00 AM, Saturday, March 27, 2021 at Hurd-Hendricks Funeral Homes and Crematory, Oneida. Visitation will be held one hour prior to services at the funeral home. A burial of cremated remains will be held at the Ontario Cemetery at a later date. Hurd-Hendricks Funeral Homes and Crematory, Oneida have been entrusted with arrangements. Memorials may be made to Altona Public Library. On-line condolences and/or expressions of sympathy may be sent through www.hurd-hendricksfuneralhome.com To send flowers or a memorial gift to the family of Elsie M. Holt please visit our Sympathy Store.
To send flowers to the family in memory of Elsie M. Holt, please visit our flower store.