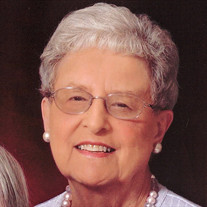 Eloise Staggs, age 93, of Galesburg, Illinois, formerly of Yates City, Illinois, died at 5:15 A.M. on Thursday, May 9, 2019 at the Hawthorne Inn of Galesburg. She was born on February 20, 1926 in Abingdon, Illinois, the daughter of Harvey “Trigg” and Ruth Celia (Fordyce) Thompson. She attended and graduated from Galesburg High School. She then attended and graduated from the legal secretary program at Western Illinois University with an Associate’s Degree. She married Willard Dale Staggs on September 19, 1948 in Galesburg. He preceded her in death on October 29, 2009. Eloise leaves behind her two daughters: Claudia (and David) Emken of Yates City, Rebecca (and Rob) Mentzer of Bloomington, Illinois; three sons: Willard (and Plearn) Staggs II of Yates City, Mark Staggs of Galesburg, Lowell (and Kristin) Staggs of Bloomington; eleven grandchildren; twenty-one great-grandchildren; and seven great-great-grandchildren. She was preceded in death by her parents; husband; two sisters; one brother; and a daughter-in-law, Joy. Eloise worked as the personal secretary for Mr.Voelker at the Heyl, Royster, Voelker & Allen law firm in Peoria, Illinois. She loved her work as a legal secretary. While living in Yates City, she was a member of the Faith United Presbyterian Church, where she served as the church secretary and newsletter editor for over forty years. When Eloise moved to Galesburg, she joined the First United Methodist Church in Galesburg, the same church she was married in seventy years ago. Church was a very important part of her life. She enjoyed teaching Bible school and Sunday school at both the Douglas and Yates City Methodist churches. Eloise was a member of the Yates City Chapter #256 Order of Eastern Star and the former Knoxville Chapter #880 Order of Eastern Star, which transferred into the Galesburg Chapter #235 Order of Eastern Star. She served as Worthy Matron a total of six times, and also served as a Grand Lecturer, Grand Representative of Saskatchewan, and a Grand Officer in 1991. She was also a member of the Lucretia Leffingwell Chapter of D.A.R. in Knoxville. She greatly enjoyed traveling; she was able to travel all over the United States and Canada, had a few shopping trips in Mexico, and also went on several cruises. Most of all, Eloise loved her family – she had a positive outlook on life and was always very cheerful and upbeat. Eloise’s family would like to extend their sincere and heartfelt thanks to the staff at the Hawthorne Inn of Galesburg for their wonderful care of Eloise, and all those who took time to come and visit her. Visitation will be held on Monday, May 13, 2019 from 4:00 P.M. to 6:00 P.M. at the Hurd-Hendricks Funeral Home & Crematory in Knoxville, Illinois, with Eastern Star Services at 6:00 P.M. Funeral Services will be held at 10:30 A.M. on Tuesday, May 14, 2019 at the Hurd-Hendricks Funeral Home & Crematory in Knoxville, Illinois, Rev. Vincent Rohn officiating. Interment will be at the Yates City Cemetery in Yates City, Illinois. In-lieu of flowers, memorial contributions may be made to the My Place St. Jude Benefit or a charity of the donor’s choice. To send flowers or a memorial gift to the family of Eloise Staggs please visit our Sympathy Store.
To send flowers to the family in memory of Eloise Staggs, please visit our flower store.