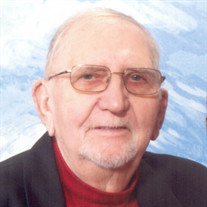 Eldon “Ed” Ekstedt, 88, of Altona, Illinois passed away Saturday, January 9, 2016 at the Rosewood Care Center in Galesburg, Illinois. Ed was born on November 29, 1927 at the family home in Altona, Illinois, the son of Harry Lawrence and Mary (Erickson) Ekstedt. He graduated from the Altona High School in 1946. That same year he joined The United States Army and soon after served his country overseas during the American Occupation of Japan. He returned home in 1947. Ed then married Patsy Hamman on February 7, 1954 in Galesburg, Illinois. Ed was very active throughout the Altona community. He served on the advisory board of the Production Credit Association; Director and Secretary for the Altona Cooperative and Grain Company for 9 years; board member and Secretary Treasurer for the Altona Volunteer Fire Department; Secretary of the Altona Cemetery board; member of the Altona American Legion Post 390 Ekstedt- Hurr where he played TAPS for many years; and member of the Altona Masonic Lodge #330. He also helped establish the Bethany Baptist Church in Altona where he has attended since 1969. He is survived by his loving wife; Patsy Ekstedt of Altona, 2 children; Eric (Nancy) Ekstedt of Altona, Mitch (Linda) Ekstedt of Altona, 6 grandchildren; Wesley Edward Ekstedt of Altona, Adam (Chelsea) Ekstedt of Springfield, Illinois, Erin Ekstedt of Springfield, Illinois, Aaron (Jessica) Stone of Altona, Michael (Heather) Stone of Algonquin, Illinois, Elijah Ekstedt of Altona, and 2 great-grandchildren; August Ekstedt and Jenna Stone. He is also survived by many nieces and nephews. He is preceded in death by his parents; Harry and Mary Ekstedt, 1 son; Andrew Nord Ekstedt, and 1 sister and brother-in-law; Cleo and Russell Bolin. Visitation will be Friday, January 15, 2016 from 5:00 P.M. to 7:00 P.M. at the Hurd-Hendricks Funeral Home in Oneida, Illinois. The funeral service will be on Saturday, January 16, 2016 at 11:00 A.M. at the Bethany Baptist Church in Altona, Illinois. Rev. Bob Nutzhorn will be officiating the service. Interment will be at the Altona Cemetery where Military Services will be conducted by the Altona American Legion Post 390 Ekstedt - Hurr and the Illinois Military Funeral Honor Guard from Macomb, Illinois. Memorial contributions can be left to the Bethany Baptist Church in Altona. Online condolences can be made at www.hurd-hendricsfuneralhome.com. To send flowers or a memorial gift to the family of Eldon "Ed" Ekstedt please visit our Sympathy Store.
To send flowers to the family in memory of Eldon "Ed" Ekstedt, please visit our flower store.