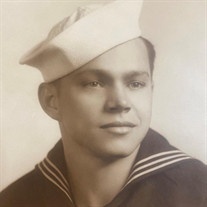 Edwin Straus, 95, of East Galesburg, passed away peacefully on Saturday, October 30, 2021, 5:30 PM at home. Edwin was born on May 20, 1926 in Hammond, Indiana. He was the son of Amos and Mary Bulah (Hobbs) Straus. Edwin married the love of his life, Frances M. Hall on December 5, 1948 in Jacksonville, Illinois. She preceded him in death on October 3, 2018. Edwin is survived by his two granddaughters, Sommer McIntyre and Tausha (Brodie) Grice, both of East Galesburg; and five great-grandchildren, Lane Grice, McKennon Grice, Jaxson Grice, Blake Grice and Garrett Grice. Along with his wife, Frances, Edwin was preceded in death by his parents; two daughters, Shelly Straus and Jacqueline McIntyre; and is cousin who was like a sister, Jeri (Ray) Palmer. Edwin graduated from Knoxville High School. He was a veteran of the US Navy, serving in World War II. After serving in the Navy, Edwin worked as an Ironworker until his retirement. He was a member of the East Galesburg Community Chapel Church. He loved to go ball room dancing with Frances, playing cards and going fishing. He was always willing to help out his neighbors with mowing and other odd jobs after his retirement. Edwin loved his community and never knew a stranger. He was known as the “2nd Street Grandpa.” Most of all, Edwin cherished the time he spent with his family and his friends. Cremation rites have been accorded. Graveside services for both Edwin and Frances are planned for Sunday, December 5, 2021 at 1 PM at the Knoxville Cemetery. Hurd-Hendricks Funeral Homes and Crematory have been entrusted with arrangements. Memorials may be donated to the East Galesburg Community Chapel. On-line condolences and/or expressions of sympathy may be sent through www.hurd-hendricksfuneralhome.com To send flowers or a memorial gift to the family of Edwin Straus please visit our Sympathy Store.
To send flowers to the family in memory of Edwin Straus, please visit our flower store.