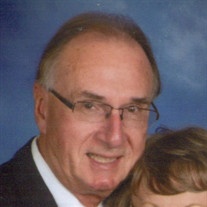 Edward Howard Anderson 69, of Galesburg, Ill., died suddenly Monday, July 10, 2017, at his home of an apparent heart attack. Born September 5, 1947, in Burlington, Iowa he was the son of Howard and Lura Prehm Anderson. He married Jennifer Hirschler on February 15, 1975. They later divorced. Mr. Anderson graduated from New London High School in 1965. In 1969, he received a degree in agriculture from Iowa State University graduating cum laude. He began his career in Fairfield, Iowa at Production Credit Association and then was transferred to the Mt. Pleasant office. He moved to Knoxville, Ill. and worked at the First Midwest Bank. He then worked at 1st Farm Credit Services in Monmouth until his retirement in 2010. He translated his love of farming into a career that served the very people he so admired. He was active in the Jaycees in Mt. Pleasant. He was an avid country music fan and enjoyed going to concerts. An Iowa State fan, he also loved the St. Louis Cardinals and was a devoted Seinfeld fan. A lifelong Iowa farm boy, he enjoyed farming with his father on the weekends. After his retirement, he enjoyed working out at the gym. He had a wonderful sense of humor and always enjoyed a good practical joke. He loved his family and would drop anything for them at a moment’s notice. Mr. Anderson is survived by his son, Christopher (Sara) Anderson of Bradford, Ill.; his life partner Judy Owens of Monmouth, Ill; his mother of New London; his sister Sandy (Kenny) Garrels of Danville; and his brother Bob (Gina) Anderson of New London. He also leaves his two precious granddaughters, Peyton and Evelyn and many nieces and nephews. He was preceded in death by his father and grandparents. He was of the Christian faith. Visitation for Mr. Anderson will be at Hurd-Hendricks Funeral Home in Knoxville, Ill. on Thursday, July 13, 2017, from 5-8 p.m. The graveside burial service will be at Long Creek Cemetery, rural Danville, Iowa on Friday, July 14, 2017, at 11 a.m. with Rev. David Mixon officiating. There is a memorial established for the New London 4-H Clubs. Online condolences can be left at www.hurd-hendricksfuneralhome.com To send flowers or a memorial gift to the family of Edward H. Anderson please visit our Sympathy Store.
To send flowers to the family in memory of Edward H. Anderson, please visit our flower store.