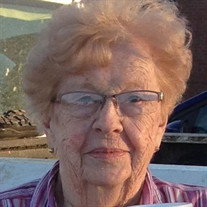 Earlene England, 86, of Oneida, Illinois, died at 12:07 P.M. on Tuesday, December 13, 2016 at the Richard Owen Hospice Home in Peoria, Illinois. She was born on March 25, 1930 in Brimfield, Illinois the daughter of Earl and Dorothy Rayfield Stine. Earlene married Eugene “Gene” Eck England on August 28, 1948 in Knoxville, Illinois. He preceded her in death on March 17, 2013. She attended and graduated from Knoxville High School, Class of 1947. She was a homemaker and Earlene was also a farming partner with her late husband, Gene. Earlene attended the Oneida United Methodist Church in Oneida, Illinois. She was also active with the Oneida United Church Women`s Society. Earlene`s passion in life was her family. Earlene is survived by her children, Sandra England of Galesburg, Illinois, MaryLou (Chuck) Park of Germantown Hills, Illinois, Rosemary (Ron) McGraw of Bloomington, Illinois and Stephen (Brenda) England of Oneida, Illinois; seven grandchildren, Jeff Park of Germantown Hills, Illinois, Jennifer (Billy) Robison of Peoria, Illinois, Mallory (Mark) Clifton of Thibodaux, Louisiana, Sarah (Kyle) Buffo of Chicago, Illinois, Michael McGraw of Normal, Illinois, Keith (Evelyn) England of Galesburg, Illinois and Nelson England of Oneida, Illinois; two great-grandchildren, Addy and Sib Buffo of Chicago, Illinois. She was preceded in death by her husband and her parents. A private funeral service will be held on Saturday, December 17, 2016. Visitation will be held on Friday, December 16, 2016 from 5:00-7:00 P.M. at the Hurd-Hendricks Funeral Home in Knoxville, Illinois. Memorials may be made to the Oneida United Church Women`s Society or to the OSF Richard L. Owens Hospice Home. Online condolences may be sent through www.hurd-hendricksfuneralhomes.com To send flowers or a memorial gift to the family of Earlene A. England please visit our Sympathy Store.
To send flowers to the family in memory of Earlene A. England, please visit our flower store.