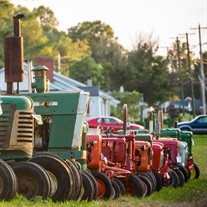 Dwight Emstrom, age 85, of rural Galesburg, Illinois, died peacefully at 8:35 P.M. on Wednesday, September 19, 2018 at his home, surrounded by his family. He was born on January 20, 1933 in rural Galesburg, the son of Albert and Bessie (Anderson) Emstrom. He attended and graduated from Galesburg High School in 1951. He married Mabel “Katy” Page on July 17, 1954 at the First Baptist Church in Galesburg. Surviving his is wife, Katy Emstrom of rural Galesburg; two daughters: Delaine (Kevin) Litchfield of Rio, Illinois and Deanne (Brian) Hamline of rural Galesburg; one son, Dean Emstrom of rural Galesburg; five grandchildren: Amy, Nikki, Drue, Kimberly and Kelsey; several great-grandchildren; and one sister, Bette L. (Gene) Nelson of Wataga, Illinois. Dwight served in the United States Army. He was a farmer and truck driver. He collected antique tractors and attended many antique tractor shows and was a member of the Spoon River Antique Association. Cremation rites will be accorded. No visitation or funeral will be held at this time. A Memorial Service will be held at a later date. Memorial contributions may be made to Beacon of Hope Hospice or Caring Senior Service. Hurd-Hendricks Funeral Home & Crematory in Knoxville is in charge of arrangements. To send flowers or a memorial gift to the family of Dwight Emstrom please visit our Sympathy Store.
To send flowers to the family in memory of Dwight Emstrom, please visit our flower store.