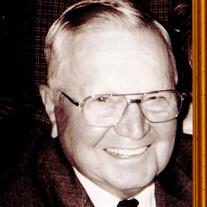 Dwane L. Gibbs of Gilson, died Sunday, November 4, 2018 at Hawthorne Inn, Galesburg. He was born on June 12, 1924 in Knox County to Clifton and Mabel (Norberg) Gibbs. He married Betty Yelm on September 7, 1946 in Knoxville. She preceded him in death on April 22, 2000. Also preceding him in death were his parents, grandson, Harold Brown; sister, Juna (Pearl) Morgan Doubet; and brother, Donald Gibbs. Surviving are 4 sons, Milo (Anna) Gibbs, of Gilson, Rex (Jan) Gibbs, of Gilson, Gene (Judy) Gibbs of Knoxville, James (Cathie) Gibbs of Williamsfield; 1 daughter, Dixie Gibbs Brown of Williamsfield; 12 grandchildren, 18 great-grandchildren, and another on the way, 2 step grandchildren, and step great-grandchildren. Dwane was reared and educated in the Williamsfield area where he attended many country schools. He served in The United States Army as a central office repairman in the Signal Corps., stationed in Korea. He was a farmer and raised livestock, living on and farming the same farm for 50 years. He was a member of the Williamsfield American Legion Post 0371, former member of the Galesburg Moose Lodge, and the Spoon River Antique Tractor Association. He was once a leader of the Dahinda 4-H Club. He and his wife enjoyed dancing and camping at flea markets and gas engine shows, where he displayed his collection of Maytag engines and other collectables. He also enjoyed showing his antique tractors. The visitation will be held Friday, November 9, 2018 from 10:00 A.M. to 11:00 A.M. at the Hurd-Hendricks Funeral Home in Knoxville, Illinois. The funeral service will directly follow at 11:00 A.M. Interment will take place at the Williamsfield Cemetery where military honors will be provided by the Williamsfield American Legion Post 0371. Memorial contributions may be left to the Williamsfield American Legion Post 0371 or to St. Jude Children’s Research Hospital. To send flowers or a memorial gift to the family of Dwane L. Gibbs please visit our Sympathy Store.
To send flowers to the family in memory of Dwane L. Gibbs, please visit our flower store.