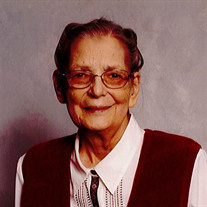 Dorothy M. Howell, 87, of Galesburg, Illinois, passed away Thursday, November 16, 2017 at Seminary Manor in Galesburg. Dorothy was born August 19, 1930 in Berwick, Illinois, the daughter of Harvey and Esther Irene (Peck) Nott. She married Donald Howell on November 15, 1947 in Maquon, Illinois. He preceded her in death on March 24, 1986. She is survived by her children, Donna Perryman of Galesburg, Dianna (Roger) Crouse of Knoxville, David (Patty) Howell of Sublette, Illinois, 8 grandchildren, 19 great-grandchildren, 2 great-great-grandchildren, 3 brothers, Donald (Betty) Nott of Galesburg, Harold (Judy) Nott of Montgomery, Illinois, and Fred (Linda) Nott of Jefferson, Tennessee. She was preceded in death by her husband, Donald Howell, parents, Harvey and Esther Nott, 2 brothers, Robert Nott, Charles Nott, and 1 sister, Shirley McCormick. Dorothy worked for the Knox County Nursing Home and OSF St Mary Medical Center as an LPN. She was very involved with her church, the Bible Missionary Church of Galesburg, and later the Bible Missionary Church of Monmouth. Dorothy enjoyed traveling when she was able. She was a loving friend to everyone. Visitation will be held on Tuesday, November 21, 2017 from 10:00 AM to 11:00 AM at the Hurd-Hendricks Funeral Home in Knoxville, Illinois. The funeral service will directly follow at 11:00 AM. Interment will be at the Haynes Cemetery in rural Delong, Illinois. Pastor James Taylor and Pastor Sam Simon will be officiating the services. Memorial contributions can be left to the Bible Missionary Church of Monmouth, Illinois. Online condolences may be made at www.hurd-hendricksfuneralhome.com To send flowers or a memorial gift to the family of Dorothy M. Howell please visit our Sympathy Store.
To send flowers to the family in memory of Dorothy M. Howell, please visit our flower store.