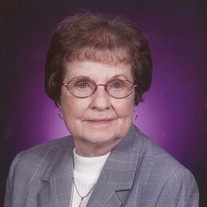 Dorothy I. Hannam, age 96, of Oneida, Illinois, passed away on October 26, 2017 at 1:30 P.M. at Seminary Manor in Galesburg, Illinois. She was born on July 19, 1921 in Oneida, Illinois, the daughter of Chester W. and Eva (Robbins) Carlson. Dorothy graduated from Oneida High School, and attended Browns Business College. She married Robert E. Hannam on September 11, 1943 in Oneida, Illinois. He preceded her in death on April 6, 1989. Dorothy worked at the Galesburg Mental Health Facility until her retirement. She and her husband owned and operated Bob’s Grocery in Oneida, Illinois. She is survived by her two sons: Alan (Lori) Hannam of Fort Atkinson, Wisconsin, Wayne (Debby) Hannam of Dahinda, Illinois; five grandchildren: Todd Hannam, Ryan (Jenny) Hannam, Kristy (Ryan) Klopcic, Angela (Matt) Gibson, Matt (Allison) Hannam; two step-grandchildren: Mike Cheek and Matt (Amanda) Cheek; nine great-grandchildren: Alyssa and Ashley Hannam, Taylor Rossey, Carter and Sophie Klopcic, Mitchell and Alexis Gibson, Katherine and Lauren Hannam; three step-great grandchildren: Charlotte, Gwendolyn, and Adelaide Cheek; her sister-in-law: Mary Hannam of Galesburg, Illinois; and many nieces and nephews. She was preceded in death by her parents; husband; three brothers: Bertis, Dale, and Boyd Carlson; and a brother-in-law: Roger Hannam. Dorothy was a member of the United Methodist Church, now the United Church, of Oneida, Illinois. She was an active member of the United Methodist Women. She was also an avid reader and a lifelong Cubs fan. She enjoyed playing cards, cribbage, and games – especially with her grandchildren. Her greatest love was her family. A special thank you to the staff of Seminary Manor in Galesburg, Illinois, for all their help and kindness. Visitation will be held on Sunday, November 5, 2017 from 12:00 P.M. to 1:00 P.M. at the Hurd-Hendricks Funeral Home and Crematory in Oneida, Illinois. The Graveside Service will be held on Sunday, November 5, 2017 at 1:30 P.M. at the Oneida Cemetery in Oneida, Illinois, Rev. Karna Peterson officiating. There will be a Fellowship at the church directly following the services. Memorial contributions can be made to the United Church of Oneida, Illinois. To send flowers or a memorial gift to the family of Dorothy I. Hannam please visit our Sympathy Store.
To send flowers to the family in memory of Dorothy I. Hannam, please visit our flower store.