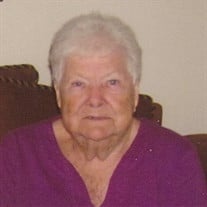 Dorothy M. Cassel, age 92, of Douglas, Illinois, passed away on Wednesday, December 13, 2017 at 1:04 P.M. at her home. She was born on December 26, 1924, in Delong, Illinois, the daughter of William and Nora Bell (Carpenter) Fields. She married Robert Cassel on February 3, 1945 in South Bend, Indiana. Robert preceded her in death on December 24, 1987. Dorothy is survived by one son: Fred Seling of Peoria, Illinois, eight grandchildren: Barry Sprout of Yates City, Illinois, Jody (Richard) Booth of Elmwood, Illinois, Robert (Shelley) Cassel of Yates City, Illinois, Sherry Cassel of Cuba, Illinois, Christina (Vick) Swenson of Canton, Illinois, Jenny (Pat) Swartz of Peoria, Illinois, Eric (Tracy) Seling of Peoria, Illinois, Tsirch (Julie) Seling of Peoria, Illinois; nineteen great-grandchildren; seven great-great-grandchildren; one sister: Clara Maniscalco of Davenport, Illinois; and many nieces and nephews. She was preceded in death by her parents; her husband; two children: Barbara Jo Cassel and William Cassel; twelve siblings; two granddaughters: Tina Coulter and Shannon Guidry; and one great-granddaughter: Ashlynn Coulter. She worked for Ackerman’s Cleaners in Peoria, Illinois, Maytag in Galesburg, and was also employed as a truck driver. Dorothy enjoyed gardening and tending to her flowers, collecting antiques, and spending time with her family and friends. She was very family oriented. Visitation will be held on Tuesday, December 19, 2017 from 10:00 A.M. to 11:00 A.M. at the Hurd-Hendricks Funeral Home in Knoxville, Illinois. The Memorial Service will directly follow at 11:00 A.M. at the Hurd-Hendricks Funeral Home. Inurnment will be at the Yates City Cemetery in Yates City, Illinois. Memorial contributions may be made to the family. On-line condolences may be left at www.hurd-hendricksfuneralhome.com. To send flowers or a memorial gift to the family of Dorothy M. Cassel please visit our Sympathy Store.
To send flowers to the family in memory of Dorothy M. Cassel, please visit our flower store.