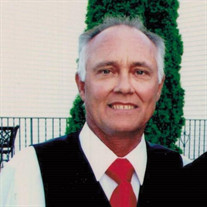 Donald E. “Donnie” Dredge, Jr., 60, of Gilson, died on Thursday, July 16, 2020, at his home. Donnie was born on May 12, 1960 in Galesburg. He was the son of Donald E. and Bonnie (Lankford) Dredge, Sr. He married Charlotte Ashby on February 11, 1989 in Knoxville. Donnie is survived by his fiancée, Nancy Reed of Gilson; his children, Dawnie (Nicholas) Mahrt of Peoria, Donald J. (Lacey) Dredge, Sr. of Galesburg, Richard (Samantha Cornwall) Dredge of Galesburg, and twin sons, George and Daniel Dredge of Knoxville; four grandchildren, Donald J., Jr. and Jordan Dredge, and Sydney and Julian Mahrt; sister Rhonda (Lenny) Brashear of Canton; half-sisters, Vicky (Rick) Morrison of New Boston and Kathie Miller of Davenport; stepbrother, Tony Morrissey of Galesburg; and step-grandmother, Betty (Hugh) (Lankford) Barnes of Galesburg. He was preceded in death by his parents, grandparents, stepbrother, Joe Morrissey, Uncle Richard and Aunt Shirley. Donnie was a 1978 graduate at Galesburg High School. He attended Lincoln Tech and studied Automotive/Diesel mechanics. He was a locomotive engineer for the BNSF railway for 39 years. During that time, he was a member of the Brotherhood of the Locomotive Engineers and Trainmen union. He retired June 1, 2020. Donnie was a local rock star, playing in the 80’s band “Dark Crystal.” He was a member of the Knox County ABATE. His hobbies included farming, hunting and riding motorcycles. Donnie had ridden to Sturgis multiple times. He was an avid Chicago Cubs and Bears fan. He enjoyed going to the movies, vacationing with his family and loved Christmas. Most of all, Donnie loved to spend time with his family. “You are our superman. Fly high and Fly Free.” Visitation will be held on Tuesday, July 21, 2020 from 4:00 -7:00 pm, with a time of sharing at 7:00 pm, at Hurd-Hendricks Funeral Homes and Crematory, Knoxville. Memorials in Donnie’s honor can be donated to the family for a college fund to be established for his grandchildren. Due to COVID-19 restrictions, face masks and social distancing will be required. On-line condolences or expressions of sympathy may be made through www.hurd-hendricksfuneralhome.com To send flowers or a memorial gift to the family of Donald E. "Donnie" Dredge please visit our Sympathy Store.
To send flowers to the family in memory of Donald E. "Donnie" Dredge, please visit our flower store.