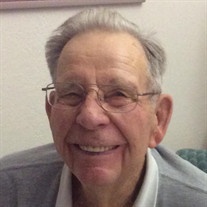 Donald G. Benson, 92, of Maquon, Illinois passed away peacefully with his family by his side on Wednesday, January 06, 2016 at 3:33 A.M. at Seminary Manor in Galesburg, Illinois. Donald was born on February 20, 1923 in Craig, Nebraska the son of Ivar and Augusta (Anderson) Benson. He married Audrey L. Maxwell on November 22, 1943 in Wayland, Missouri. He was a faithful and loving husband for 72 wonderful years. Donald was a farmer through and through. He farmed almost his entire life in the Yates City and Elba Township areas. He was a man of integrity and love. Donald was a loving and devoted Husband, Father, and Grandfather. He was also a proud member of the Knox County Farm Bureau and a former Yates City Lions Club member. He is survived by his loving Wife; Audrey L. Maxwell, 5 children; Larry (and Sharon) Benson of Maquon, Illinois, Jerry (and Deb) Benson of Williamsfield, Illinois, Gary (and Judy) Benson of Elkader, Iowa, Mary (and Larry) Isenberger of Davis, Illinois, and Janet (and Eric) Windish of Yates City, Illinois. He is also survived by 18 Grandchildren, 40 Great-Grandchildren, 6 Great-Great-Grandchildren, and his Sister, Betty Boone of Arizona. Donald was preceded in death by his parents; Ivar and Augusta Benson, 1 Brother; George Benson, 1 Sister; Marion Krohn, 1 Granddaughter, 1 Grandson, and 1 Great-Granddaughter. The visitation will be held on Friday, January 8, 2016 from 5:00 P.M. to 8:00 P.M. at the Hurd-Hendricks Funeral Home in Knoxville, Illinois. The funeral service will be on Saturday, January 9, 2016 at 10:00 A.M. at the Hurd-Hendricks Funeral Home in Knoxville. Interment will be at Oak Lawn Memorial Gardens in Galesburg, Illinois. Memorial Contributions can be made to the Elba-Salem Fire Protection District, B-Y-E Ambulance, or to the Seminary Manor Resident Fund. Online condolences can be left at www.hurd-hendricksfuneralhome.com To send flowers or a memorial gift to the family of Donald G. Benson please visit our Sympathy Store.
To send flowers to the family in memory of Donald G. Benson, please visit our flower store.