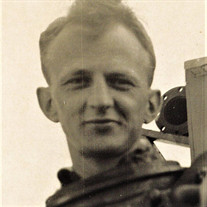 Derrill Dean Carrigan, age 93, of rural Knoxville, Illinois passed away at 8:36 A.M. on Wednesday March 14, 2018 at the OSF Saint Mary Medical Center in Galesburg, Illinois. He was born on March 6, 1925 in Peoria, Illinois, the son of George Edward and Mary Edith (Wright) Carrigan. He married Madeline L. Eiker on August 18, 1956 at Maxey Chapel in Persifer Township. She preceded him in death on May 30, 2016. Derrill is survived by his two sons: John Carrigan of Knoxville, Kendall (Christine) Carrigan of Levan, Utah; his grandchildren: Karen (Brandon) Upchurch of Kokomo, Indiana, Katelyn (Tim Shotts) Carrigan of Galesburg, Bambi (Jerry) Strom of Galesburg, Michael Rodriguez of Abingdon; his great-grandchildren: Lily Upchurch, Zoe Jacobsen, Jacklyn Strom, River Strom, Keegan Knutson, Quinton Knutson, and Cobain Knutson; former daughters-in-law: Sue Johnson and Cindy Carrigan; and many cousins, nieces, and nephews. He was preceded in death by his parents: George E. Carrigan and Mary Edith McBeth; his wife, Madeline Carrigan; and a sister, Rosemary Wilson. He quit high school in 1943 to enlist in the United States Army at the age of eighteen, and served in the 123rd Illinois Field Artillery Battalion, from April of 1943 until September of 1952. He fought in the Battle of the Bulge in Ardennes, the Rhineland Campaign, and throughout central Europe during World War II. He received two Overseas Bars, Good Conduct Medal, World War II Victory Medal, American Campaign Medal, European-African-Middle Eastern Theater Ribbon, and W/3 Bronze Battle Stars in recognition of his service. After his military service, Derrill traveled to California to pursue a career as a commercial diver. He was one of the first in the underwater welding trade and performed ship repair and maintenance at the Long Beach ship yards. He later purchased his own commercial fishing vessel and used his diving skills to fish for abalone and lobster. After returning to Illinois he opened a dive shop for a short time in Knoxville. He worked for Gale Products, and then worked for the Illinois Power Company as a gas journeyman for twenty-four years, retiring in 1987. After his retirement, he and his sons John and Kendall owned and operated a boat lift service in the Oak Run area. Derrill enjoyed gardening and spending time in the outdoors when he was able, and he especially enjoyed being around the water. He liked working on the farm and raised carrier pigeons during his younger years. He spent lots of time in Oak Run and was often at the Watering Hole with Madeline having coffee and socializing. Most of all, he loved his family and spending time with them. He will be greatly missed by all who knew him. Visitation will be held from 12:00 Noon to 1:00 P.M. on Thursday, March 22, 2018 at the Hurd-Hendrick Funeral Homes & Crematory in Knoxville, Illinois. Funeral Services will be held at 1:00 P.M. on Thursday, March 22, 2018 at the Hurd-Hendricks Funeral Homes & Crematory in Knoxville, Illinois will Rev. Russ Collister officiating. Interment will be at the Haynes Cemetery in Rural Delong, Illinois. Memorials may be made to the VFW. To send flowers or a memorial gift to the family of Derrill Dean Carrigan please visit our Sympathy Store.
To send flowers to the family in memory of Derrill Dean Carrigan, please visit our flower store.