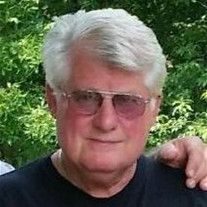 Dennis Arthur “Butch” Van Unnik, age 72, of Galesburg, Illinois, died at 3:05 A.M. on Wednesday, January 16, 2019 at the Illinois Veterans’ Home in Quincy, Illinois. He was born on December 19, 1946 in Kewanee, Illinois, the son of Camiel V. and Ruth (Burkardt) Van Unnik. He was reared and educated in the Galesburg area, graduating from Galesburg High School in 1964. After graduation, Dennis enlisted in the Unites States Navy and proudly served his country for two tours in the Vietnam War. During his service, he earned the National Defense Service Medal, Air Force Outstanding Unit Award, Vietnam Service Medal, and Vietnam Campaign Medal. After leaving the military he married Georgia L. Van Oosten and started working for Uncle Bill and Aunt Beverly Burkardt to start his farming career. On February 28, 1987, Dennis was married to Judy A. (Perry) Kelly in Galesburg. Left to cherish his memory is his wife, Judy A. Van Unnik of Galesburg; six sons: Russell E. (Peggy) Blasé of Sterling, Illinois, Chad A. (and Kristi) Van Unnik of Midlothian, Texas, Aaron (and Erin) Van Unnik of Hooppole, Illinois, Christopher (and Connie) Kelly of Normal, Illinois, David Kelly of Littlefield, Texas, Joseph (and Stacy) Kelly of Columbus, Wisconsin; seventeen grandchildren; three great-grandchildren; three siblings: Janice (and Kevin) Spivey of Woodhull, Illinois, Derek (and Donna) Van Unnik of Galesburg, Denise (and Ronald) Wiscons of Knoxville, Illinois; two sisters-in-law, Linda Van Unnik of Galesburg, Wanda Van Unnik of Oneida, Illinois; and many nieces and nephews. He was preceded in death by his parents; two brothers: Gary “Bubble” Van Unnik, Victor Van Unnik; and one sister, Bertha Jean "Jeanne" Karl. He worked for a time as a farm manager, then went on to work as a truck driver. He was later employed at the Galesburg Ready-Mix, and finally worked at the Illinois Department of Transportation as a Highway Maintainer, until his retirement in December of 2012. Dennis was a member of the Harry Philblad American Legion Post #749 as well as the VFW Post #8. He greatly enjoyed hunting and being in the outdoors. Visitation will be held on Friday, January 25, 2019 from 5:00 P.M. to 7:00 P.M. at the Hurd-Hendricks Funeral Home & Crematory in Knoxville, Illinois. Funeral services will be held on Saturday, January 26, 2019 at 11:00 A.M. at the Hurd-Hendricks Funeral Home & Crematory in Knoxville. Rev. Vincent Rohn will officiate. Military services will be conducted by the VFW/ American Legion/ AMVets Honor Guard. Interment will be at the Knoxville Cemetery in Knoxville. Memorial contributions may be made to the Alzheimer’s Association or to the Vietnam Veterans Memorial. To send flowers or a memorial gift to the family of Dennis Arthur "Butch" Van Unnik please visit our Sympathy Store.
To send flowers to the family in memory of Dennis Arthur "Butch" Van Unnik, please visit our flower store.