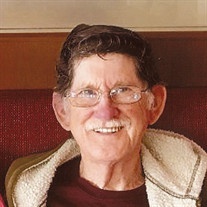 David L. Morgan, age 76, of Oneida, Illinois died at 6:02 pm on Saturday, August 26, 2017 at OSF St. Mary's Medical Center, Galesburg, Illinois surrounded by his loving family. He was born on September 20, 1940 in Galesburg, Illinois the son of Willard Dwight and Rosetta Pearl Fones Morgan. He attended and graduated from Galesburg High School. He married the love of his life, Donna Jean Reynolds on June 19, 1966. They were married for 51 years. Surviving is his wife, Donna Morgan, Oneida, his daughters: Kristine (Dale) Mundwiler of Oneida, IL, Lori (Jeff) Kohl of Dahinda, IL, Lisa (Jason) Schaab of Pekin, IL, Kary (Jeremy) West of Oneida, IL and his only son, his dog Buddy. Grandchildren: Scott Mundwiler, Brett Mundwiler, Morgan Allen (Blake), Adam Kohl, Jordan Self, Courtnie Self (Josh), Tyler Woods, Taylor Morgan, Ryan (Blayne) Kohl, Megan (Jason) Kohl-Hallam, Matt Kohl and Brenna West. Great-Grandchildren: Cole McElhaney, Harley Mundwiler, Owen Cunningham and Landon Kohl. He has 3 great-grandchildren on the way as well. Also surviving are his siblings: Lee (Linda) Morgan of Wataga, IL, Willard "Bud" (Beverly) Morgan of Galesburg, IL, Dorothy Smith of Wataga, IL, Donna Varner of Oneida, IL, Mary Pattinson of Galesburg, IL and Lois Berg of Wataga, IL. He was preceded in death by his parents, one brother, Robert Morgan and one sister Maxine Line. He worked at the former Weaver Yemm Automotive after high school, then shortly after, began working for Admiral/Maytag in Galesburg where he worked for 32 years, retiring in 2002. He was a simple man, a family man who always worked hard to provide for his wife and daughters. He enjoyed driving around Oneida, stopping to visit with friends and family and he loved going to backyard sales. He was a proud owner of a maroon 1979 El Camino and carried pictures of it in his pocket to show everyone. He was always up for a game of dice or cards, but if he wasn't winning he'd joke that you must be cheating. Most of all he was a family man who would do anything to help the ones he loved. He was a son, a husband, a dad, a grandpa, a great-grandpa, a brother and an uncle. He loved his family and it showed in everything he did. His orneriness and sense of humor will be missed by all that had the pleasure of knowing him. Visitation will be held from 5:00 to 8:00 P.M. on Tuesday, August 29, 2017 at the Hurd- Hendricks Funeral Home & Crematory in Oneida, IL. Funeral services will be held at 10:00 A.M. on Wednesday, August 30, 2017 at the Hurd-Hendricks Funeral Home & Crematory in Oneida, IL, with Rev. Don Reynolds officiant. Interment will be at Oneida Cemetary, Oneida, IL. Memorial contributions may be made to Stone-Hayes Center, Galesburg, IL, The Autism Society or the American Stroke Association. To send flowers or a memorial gift to the family of David L. Morgan please visit our Sympathy Store.
To send flowers to the family in memory of David L. Morgan, please visit our flower store.