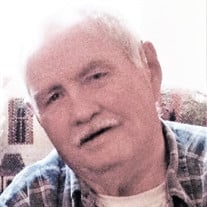 David W. Lambert, 75, of Oneida, Illinois passed away Thursday, June 20, 2019 at 11:35 P.M. at his home. David was born November 21, 1943 in Mendota, Illinois, the son of Walter and Carrie (Alexander) Lambert. After graduating from Amboy High School, he joined the United States Army where he proudly served his country stationed overseas in Germany. He later worked for the railroad for 41 years. David married Margaret Huls on August 21, 1975 in Mendota, Illinois. She preceded him in death on July 25, 2011. David attended the United Church of Oneida and most recently the United Church of Altona. He was a member of the Wednesday night Promise Keepers Small Group. He passionately donated to various cancer research foundations. David enjoyed being in the outdoors including fishing and working with his hands. He also enjoyed carpentry and watching westerns. He is survived by 4 children, Amanda (Ted) Swanson of Oneida, Illinois, Rebecca (Stephen) Merz of Oneida, Illinois, John Lambert of Galesburg, Illinois, Tim (Kirsti) Lambert of Galesburg, Illinois; 20 grandchildren; 6 great-grandchildren; 3 sisters, Judy Dilamarter of Bowling Green, Kentucky, Katherine Golch of New Castle, Pennsylvania, and Peggy (John) Hicks of Harmon, Illinois. He was preceded in death by his wife; parents; son, Eric Huls; and brother, Paul Lambert. Visitation will be Wednesday, June 26, 2019 from 5:00 P.M. to 7:00 P.M. at the Hurd-Hendricks Funeral Home in Oneida, Illinois. The funeral service will be Thursday June 27, 2019 at 10:00 A.M. at the Hurd Hendricks Funeral Home in Oneida, Illinois. The graveside services will be Thursday, June 27, 2019 at 2:00 P.M. at the Restland Cemetery in Mendota, Illinois. Memorial contributions may be left to the family or the ROWVA Food Pantry. To send flowers or a memorial gift to the family of David W. Lambert please visit our Sympathy Store.
To send flowers to the family in memory of David W. Lambert, please visit our flower store.