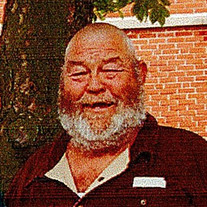 David L. “Grizz, Sr.” Hodges, Sr., age 70, of Avon, Illinois, died at 2:45 A.M. on Friday, April 26, 2019 at his daughter’s home in Avon. He was born on May 27, 1948 at the Cottage Hospital in Galesburg, Illinois, the son of Willard and Kathleen (Bennett) Hodges. He was reared and educated in the Dahinda and Williamsfield area. On June 6, 1970, David was married to Glenna Thompson in Knoxville, Illinois. David is survived by his two daughters: Norma (and Johnathan Reutner) Walsh of Avon, Theresa (and Ron Hanley) Hodges of Dahinda; seven grandchildren: Blake (and Becca) Walsh of Bushnell, Illinois, Steven (and Sam Ott) Walsh of Dahinda, Trenton Walsh of Williamsfield, Cody Hanley of Dahinda, Dakotah Hanley of Dahinda, Jazmyn Smith of Galesburg, Justin Smith of Wataga; two great-grandchildren: Trinity Walsh of Springtown, Texas, Bri-Leigh Singleton of Bushnell; his sister, Katherine (and Steven) Johnson of Elmwood, Illinois; one nephew; one great-niece; and one great-nephew. He was preceded in death by his parents; his son, David L. Hodges, Jr.; a great-grandson, Marcus Walsh; and several aunts and uncles. He worked for ADM Trucking, Roadlink, and CRT for a time, later becoming the owner and operator of his own semi-truck. He retired in 2009, after driving millions of miles throughout 48 states. David enjoyed working on his semi and tinkering with lawnmowers. He also enjoyed spending time drinking whiskey and smoking, watching videos on YouTube, and looking for deals on eBay. Most of all, Grizz Sr. loved to spend time with his family and friends. He will be greatly missed. Cremation rites will be accorded. A Celebration of Life will be held on May 18, 2019, beginning at 12:00 P.M., at David’s home: 1923 Knox Road 1400 N, Dahinda, Illinois. Hurd-Hendricks Funeral Home & Crematory is assisting the family with arrangements. Memorial contributions may be made to the family. To send flowers or a memorial gift to the family of David "Grizz, Sr." L. Hodges Sr. please visit our Sympathy Store.
To send flowers to the family in memory of David "Grizz, Sr." L. Hodges Sr., please visit our flower store.