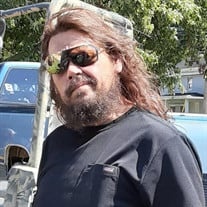 Daniel Wayne “Dan” Woods, 44, of Galesburg, passed away surrounded by his family on Wednesday, November 18, 2020, 3:46 PM, at OSF St. Francis Medical Center, Peoria. Dan was born on February 27, 1976. He was the second son of George David and Cheryl Lynn Woods, and younger brother to Mathew. He was raised in the small village of Altona, Illinois and grew up there with me in the backyard until he was nine. We moved to the Foxtown Road and quickly became a country boy at heart. There, he found his love and passion for excitement as he and I were never afraid to do something crazy, continuously driving our folks to several levels of angry. Dan attended ROVA schools, graduating in 1994; where he excelled in welding, drafting, small engines and woodshop. Dan won awards in 4-H; he had even attempted horse showing. But it was his love of the gas-powered engines where his skills accelerated. He could rebuild anything. He could tear into any engine and make it better. His abilities had no end. At ten he received his first bike. It wasn’t much, just a little 50cc Honda that he once drove up a tree. After that, his need for speed on two wheels was never ending. The times we had; I will never stop remembering. After high school, Daniel attended Wyoming Technical College in Laramie, Wyoming and found he was good at fabrication and body work. Coming back home, Dan held several jobs and along that time he was married and in 1996 became a father to Sara. He took up driving over the road, Knight Welding building dump trucks. As there never seemed to be an end to the hardships, my brother endured, he remarried and became a father for a second time to Haydyn Raelyn. The love he had for his family was unfathomable. His passion for his friends had no equal. My brother wore his heart on his sleeve and was willing to help anyone who needed it, even when most of his efforts were for not. His resolve always amazed me. All his hardships and troubles became mountains and with each one he quickly ascended and moved forward. On the outside he was everyone’s best friend, and I am learning he had many. Some I will never meet or know, but I know this empty sorrow is being felt across the grid. Dan finished his life as a bon-a-fied self-employee of Dans Custom Bikes on the outskirts of Abingdon, Illinois. From that small shop and driveway full of custom vehicles, he worked his magic and unfortunately many will be left unfinished. Really, in hind sight, all he was trying to do was get recognized and accepted. To be a part of something bigger, to be socially accepted by his community and his followers. Daniel worked hard and constantly, never making time for sleep. All the while he got healthy, defeated diabetes and was on his way to a new beginning. But it was brought short and he lost out while trying to recover from a two-vehicle accident that took place on a lonely stretch of Knox County blacktop. Many thanks go out to the first responders, life flight crew, nurses and fifteen people that tried to no avail at saving him. Although we may now never know the truth or facts as to why or how, you may all know this; I will never hear any man or woman speak ill of him…ever…from any of them. Dan is survived by his parents; brother, Mathew (Stephanie) Woods of Oneida; daughters, Sara (Brandon) Watkins and Haydyn Raelyn, both of Abingdon; grandson, Sawyer Watkins; nieces and a nephew; and many friends. Dan is also survived by the love of his life and soul mate, Debbie Martz of Abingdon. He was preceded in death by so many friends and family; just recently this year an aunt, uncle and grandfather. We will miss you so much brother. We love you and I will see you on the other side. Visitation will be on Monday, November 23, 2020 from 1-7 PM at Hurd-Hendricks Funeral Homes and Crematory, Knoxville. Family will be present at the funeral home from 5-7 pm. A graveside service will be held 11 AM, Tuesday, November 24, 2020 at the Maquon Cemetery. Memorials contributions may be made to Shop with a Cop. Due to COVID-19 mitigations, attendance restrictions and facemasks will be enforced. On-line condolences or expressions of sympathy may be made through www.hurd-hendricksfuneralhome.com To send flowers or a memorial gift to the family of Daniel Wayne Woods please visit our Sympathy Store.
To send flowers to the family in memory of Daniel Wayne Woods, please visit our flower store.