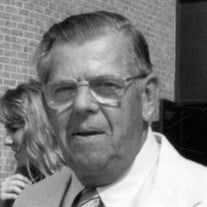 Clarence F. “Erick” Erickson, 93, of Galesburg, Illinois died at 9:50 P.M. Wednesday, February 24, 2016 at Knox County Nursing Home, Knoxville, Illinois. Clarence was born on January 29, 1923 in Galesburg, Illinois, the son of Karl Victor and Myrtle (Peterson) Erickson. He was raised and educated in Galesburg and graduated from Galesburg High School. He married Georgene Olson on July 20 1946 at Trinity Lutheran Church, Galesburg, Illinois. Clarence was a salesman for Riden Feed Supply for many years. He is survived by his wife, Georgene Erickson of Galesburg, Illinois, and one son, Ron Erickson of Kirksville, Missouri. He was preceded in death by his parents; one brother, Carl Erickson; and two sisters, Gladys Preno and Marion Branam. A Celebration of Life will be held on March 5, 2016 from 1:00 P.M. to 3:30 P.M. at the Knox County Nursing Home, Knoxville, Illinois. In lieu of flowers memorials may be made to the Knox County Nursing Home. Hurd-Hendricks Funeral Home and Crematory, Knoxville, Illinois is assisting the family. Online condolences can be made at www.hurd-hendricksfuneralhome.com To send flowers or a memorial gift to the family of Clarence F. "Erick" Erickson please visit our Sympathy Store.
To send flowers to the family in memory of Clarence F. "Erick" Erickson, please visit our flower store.