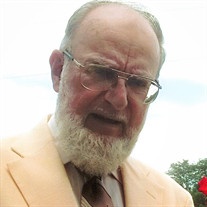 Charles F. “Chuck” Swigart, Jr., age 75, of rural Knoxville, Illinois, died at 10:11 P.M. on Wednesday, October 3, 2018 at the OSF Saint Mary Medical Center in Galesburg, Illinois. He was born on March 25, 1943 in Galesburg, the son of Charles F. and Rose Pearl (Oberlander) Swigart, Sr. He was reared and educated in the Galesburg area. He married Phyllis J. Kane on January 9, 1961 in Rock Island, Illinois. Surviving is his wife, Phyllis Swigart of rural Knoxville; his sons: Charles F. (and Lisa) Swigart III of Gilson, Illinois, Phillip J. (and Denise) Swigart of Rio, Illinois, Dale L. (and Bonnie) Swigart of Galesburg; four grandchildren; thirteen great-grandchildren; and his sister, Barbara Coons of Abingdon, Illinois. He was preceded in death by his parents; one sister; and seven brothers. He worked as a warehouse man for Maytag for thirty-one years, until his retirement. Chuck enjoyed tinkering with many different projects, and he will be remembered as being a jack-of-all-trades. He and his wife faithfully attended Maxey Chapel United Methodist Church in rural Knoxville. Visitation will be held on Monday, October 8, 2018 from 5:00 P.M. to 7:00 P.M. at the Hurd-Hendricks Funeral Home & Crematory in Knoxville. Funeral Services will be held on Tuesday, October 9, 2018 at 10:30 A.M. at the Hurd-Hendricks Funeral Home & Crematory in Knoxville. Rev. Russ Collister will officiate. Interment will be at the Westfall Cemetery in rural Victoria, Illinois. In lieu of flowers, memorial contributions may be made to Maxey Chapel United Methodist Church or a charity of the donor’s choice. To send flowers or a memorial gift to the family of Charles F. "Chuck" Swigart Jr. please visit our Sympathy Store.
To send flowers to the family in memory of Charles F. "Chuck" Swigart Jr., please visit our flower store.